The video is giving us major fitness inspiration 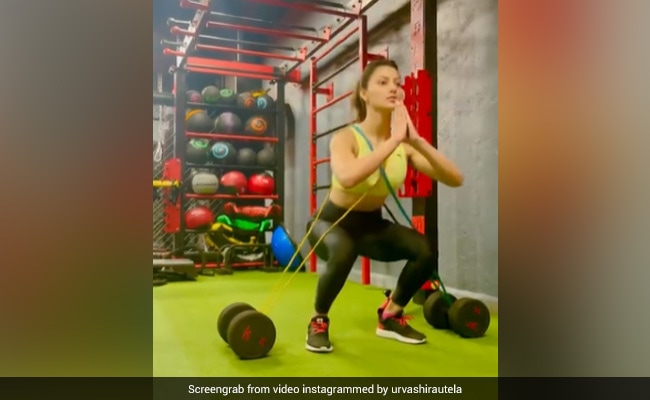 Urvashi Rautela in a still from the video. (courtesy urvashirautela)

Urvashi Rautela, who has quite a bit of a reputation as a fitness enthusiast, shared a new video on her Instagram profile on Thursday. In the video, the actress can be seen doing squats. Wait, there's more to it. She can be seen doing squats with resistance bands. Now that is intense. Urvashi  accompanied her video along with a caption that read: "Vertical jump squats with resistance bands." She also listed the health benefits of the aforementioned drill and she wrote, "3 great benefits of banded squats: "Strengthens weak muscle groups, changes the strength curve and prevents lower back pain." Her Instafam gave her a shout out in the comments section.

Urvashi Rautela trended big time for her work out video, which was super intense. She wrote: "No pain, no gain," Urvashi could be being punched at her abs as part of her training. "He clocks me right in the gut. Getting walloped is part of my action film. Absorbing his blows," she captioned her post.

ICYMI, this is the one we are referring to:

Urvashi Rautela is a former Miss India and she is best-known for starring in films such as Singh Saab The Great, Great Grand Masti, Hate Story 4 and Race . She was last seen in Virgin Bhanupriya, which released on streaming platform Zee 5. Urvashi Rautela often features in headlines for her tweets. For instance, she was trolled for copy-pasting a journalist's tweet about the film Parasite last year. Urvashi will be next seen in Black Rose. The thriller has been directed by Mohan Bharadwaj.