ICYMI: This Pic Of Urvashi Rautela Is A "Muddy Marvel" 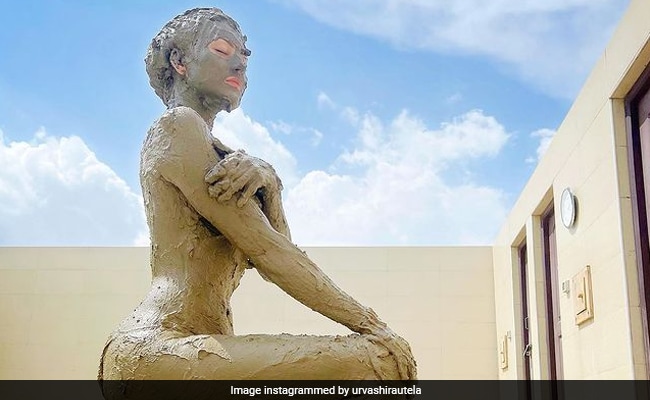 Are you a fan of mud baths? If yes, you will relate to actress Urvashi Rautela a lot. On Monday, the 27-year-old actress shared an interesting glimpse of her mud bath session. "My favourite mud bath spa/ therapy," she captioned her photo, in which she can be seen resting on a chair while being covered in red mud. In her post, Urvashi made a reference to the Balearic Islands of Spain and wrote: "Enjoying the red mud of a Balearic beach." In her post, Urvashi also talked about the benefits of getting a mud bath, describing it as a "muddy marvel": "It's said to have been used as a mirror by Venus, the Roman goddess of love. Its mineral-rich mud is considered therapeutic and good for skin. Mud really can be a muddy marvel."

Urvashi Rautela recently trended a great deal for her work out video, which was pretty intense. Titled "No pain, no gain," Urvashi can be seen being punched at her abs as part of her training. "He clocks me right in the gut. Getting walloped is part of my action film. Absorbing his blows," she captioned her post.

Earlier this year, Urvashi Rautela featured in headlines for her quirky sartorial choice. "Yea, yea. The outfit was super heavy (20 pounds on my body) but you know. Anything for fashion, baby," she wrote in her post.

Urvashi Rautela is a former Miss India (Universe) and has featured in films such as Singh Saab tThe Great, Great Grand Masti, Hate Story 4 and Race 3. She was last seen in Virgin Bhanupriya, which released on streaming platform Zee 5. Urvashi Rautela often features in headlines for her tweets. Like last year, she was trolled for copy-pasting a journalist's tweet about the film Parasite.