Uday Chopra made a "confession" and wrote: "Confession: I am not ok! I am trying but so far I am failing!" 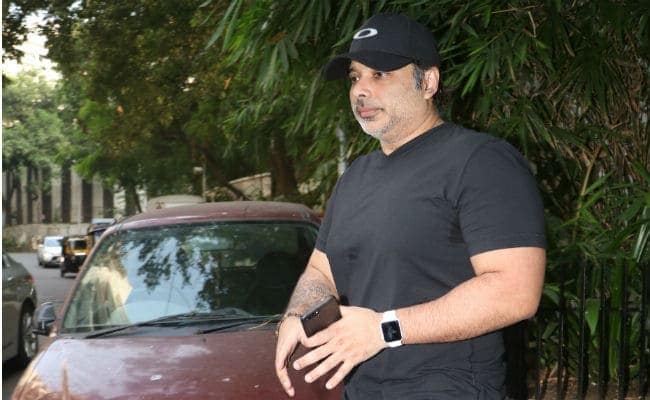 Uday Chopra found a spot on the list of trends after he posted and deleted two cryptic tweets on Friday. In one of his tweets, which are now deleted and are rather depressing in its tone, the actor made a "confession" and wrote: "Confession: I am not ok! I am trying but so far I am failing!" In the preceding tweet, also deleted, he equated his feeling of quitting Twitter for just a brief while with the phrase "close to death" and wrote: "For a few hours, I deactivated my Twitter account. It felt as close to death as it could get. Was phenomenal! I think this is a good option to suicide. I might be doing it permanently."

Uday Chopra may have deleted his tweets but screenshots are being circulated on the Internet. 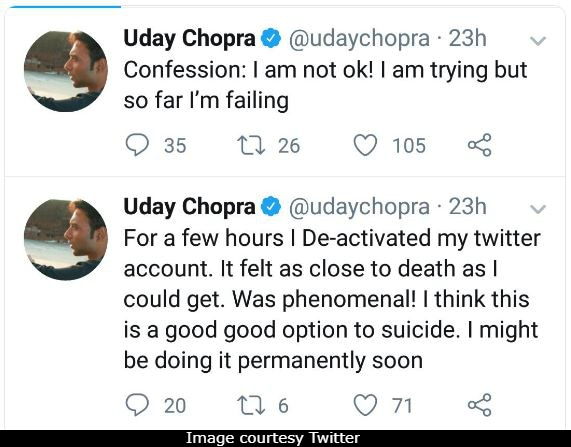 Meanwhile, fans were quick to spot Uday Chopra's depressing tweets, and expressed concern as umpteen responses poured in asking the actor to remain strong in the time of difficulty. Twitter also suggested that Uday Chopra's tweets are a result of suffering from depression:

Read today he is under depression, get well soon @udaychopra

Hey please stay. We don't realise that but we do have people who love us,who care for us deeply and who would die for us. Keep that in mind. Depression does not end with the person , it just passes on to the other. Just let alone us. Think about your closed ones. They do love you

Hey my friend depression is a lesson bro...u will become more stronger and better persoon from it.... i m in that stage from many days....keep believing buddy Best of luck @udaychopra

Brother Stay Strong, Tommorow is another day, Just another day. Depression is NOT permanent.
YOU ARE.

While Uday Chopra often trends for his quirky tweets involving self-directed jokes, contrasting tweets are also often spotted on his timeline. Last year, he wrote on depression and anxiety and that: "help is available."

Depression, Anxiety, Social withdrawal, behavioral changes, over-indulgence in food, alcohol, drugs etc these are all signs. If they continue for a longer period of time then there could be an issue. Most importantly do not judge them for it, instead try and understand them.

Uday Chopra, who once featured in headlines for his reported romance with Nargis Fakhri, posted this in August last year:

I wish I could love with the same intensity I used to love a few years ago. There was this girl and I felt alive just loving her. I've lost that now. I just want that passion back. Maybe that's all I need.

Uday Chopra, who was last seen in Aamir Khan's Dhoom: 3 in 2013, told IANS in an interview the following year: "That's over. My focus is not there. Also, I don't have time to act." Photos of Uday Chopra, papped by the shutterbugs in 2017, revealed that he had noticeably gained several kilos from how we saw him in Dhoom 3.