Well, we are all aware how 'no-filter' both Twinkle and Dimple can be 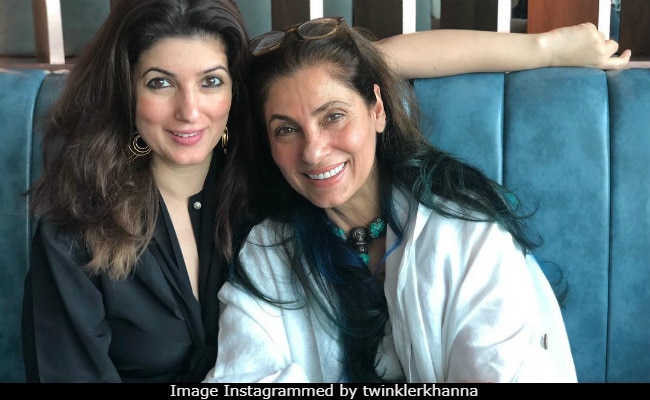 New Delhi: Twinkle Khanna wished mom Dimple Kapadia on her birthday in the most typically Twinkle way. In several interviews and interactions previously, Twinkle attributed her sense of humour and outspokenness to her mother and her new post is just another reiteration of that. Twinkle Instagrammed a photo from Dimple's birthday lunch and wrote: "Birthday lunch with the most beautiful woman in the world - She needs no filters and luckily doesn't have one either." Well, we are all aware how 'no-filter' Dimple can be. Don't you remember Twinkle Khanna's book launch from August 2015? With the birthday lunch, Dimple Kapadia celebrated her 61st birthday on Friday.

Twinkle's 'no-filter' tweet about mom Dimple also reminds us what the veteran actress had told Twinkle when she was a "plump nerd." Sharing an incident from when she was a student, Twinkle had told IANS: "When I came to her (Dimple Kapadia) as a plump nerd with my exam results and said look, 'I got 97 per cent in Mathematics', she said it matches your weight." LOL.

In November 2016, Twinkle also revealed how Dimple had warned her about Akshay Kumar's supposed sexual orientation before Twinkle and Akshay to get married. It was delivered in front of Akshay, in the same room - "I have to tell you something after he goes. Your friend, who's doing some piece on gay newspaper, says that Akshay is gay."

Twinkle Khanna's book launch in 2015 was a star-studded affair, made epic by Dimple Kapadia, who was invited to launch Mrs Funnybones. Ignoring repeated protests from Akshay, Dimple went on to narrate an incident from when Twinkle and Akshay were a newly married couple. Why don't you just watch it here?

Twinkle Khanna is the author of two bestselling books and also wrote and produced Akshay Kumar's PadMan, a film on the importance of menstrual hygiene.