Twinkle Khanna Wishes Her Friends Were Like A Sari. No, Really 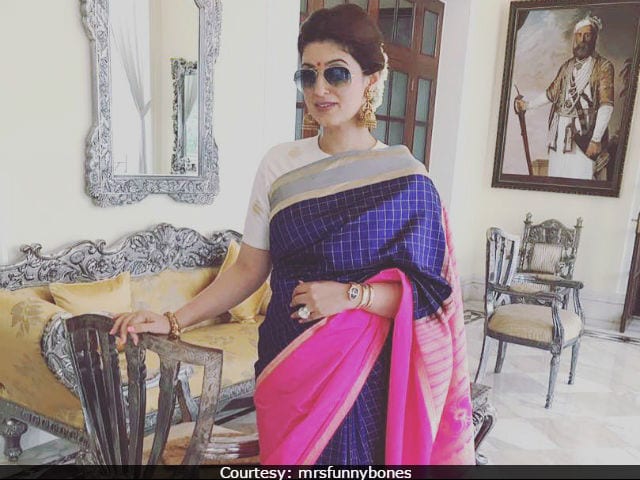 New Delhi: Aamir Khan, Karan Johar and all of Twinkle Khanna's other friends should note the tweet she posted on Thursday, a day after the National Awards ceremony at the Rashtrapati Bhavan in New Delhi. Twinkle, 43, accompanied her husband Akshay Kumar to the National Awards, where he received the Best Actor prize for his performance in Rustom. Their 14-year-old son Aarav was with them. Twinkle looked like a million bucks in a stunning blue and pink Raw Mango sari - the subject of her tweet. It wasn't the awesomeness of the whole six yards that she was in raptures over but the "non-judgemental, accommodating and forgiving nature" of saris in general and how she wishes she "had more friends like that." So, dear Aamir, KJo and the rest of you - be more like a sari.

A sari is non-judgemental, accommodating and forgiving in nature- I wish we had more friends like that as well:) #SariStorypic.twitter.com/Hui8GiXpAx

Do you agree with Twinkle Khanna?

Soon after Akshay received his National Award for Best Actor from President Pranab Mukherjee, he thanked fans for their support. He tweeted:

Quick as a flash, Twinkle Khanna responded, "So now I can officially refer to him as my trophy husband."

So now I can officially refer to him as my trophy husband :) #NationalFilmAwardshttps://t.co/VlZhkAN6c0

Promoted
Listen to the latest songs, only on JioSaavn.com
The 49-year-old actor was flooded with wishes from his colleagues after he got the National Award. Anil Kapoor, Jackie Shroff, Anupam Kher, Paresh Rawal and Sajid Khan were among the first celebrities to congratulate Akshay.