The One Thing Kajol And Twinkle Khanna Have In Common - Any Guesses?

Twinkle Khanna shared a snippet of the chat on Instagram 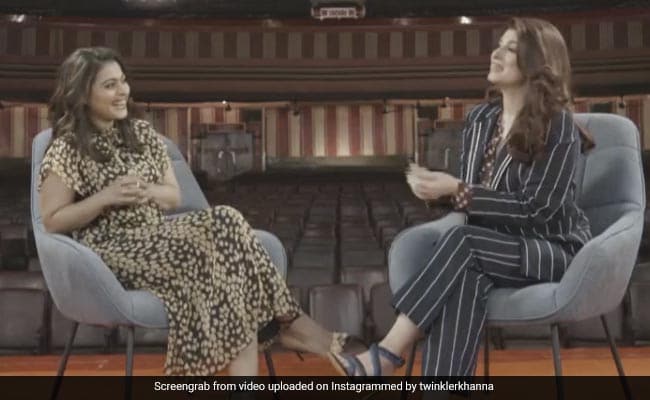 Kajol and Twinkle in a still from the video. (courtesy: twinklerkhanna)

What happens when you put two incredible women together? You get a refreshing and candid conversation on identity, womanhood, career, family and everything else. At least, that is what we got when Kajol and Twinkle Khanna came together for a lovely chat. As per a video shared on Instagram, Twinkle Khanna and Kajol can be seen sharing anecdotes and laughing as they discuss the things they have in common. The clip begins with Twinkle Khanna saying, “We have a lot of things in common.” To this, Kajol says, laughing, “No,” before agreeing that they do have one thing in common, but amid giggles adds that it is “unmentionable”.

Not one to mince her words, Twinkle Khanna replies, “What we are not mentioning is basically our voluptuous bottoms.  Because I was just told to hide the cards, a mic and an entire laptop behind, and it's really not that big!” This sends Kajol into a fit of laughter and she says, “I thought you weren't supposed to say that.” To this, Twinkle Khanna says, “I don't care anymore,” laughing.

Sharing a promo of the interview that is streaming on the YouTube channel of Tweak, Twinkle Khanna wrote, “Next in The Icons, the fabulous Kajol shares some of her wisdom interspersed with a bunch of wisecracks as we do our own version of bottoms up!” asking viewers to watch the full interview.

The interview, which was conducted at the famed theatre, Maratha Mandir in Mumbai, also saw the duo discuss their career and family. Talking about their families, Twinkle Khanna asks Kajol how she felt about going from calling her mother-in-law "aunty" to "mummy ji" and whether she felt like a "hypocrite" for doing so.

To this Kajol says, “I didn't. And fortunately for me, my mother-in-law has given me that time and space.” Sharing an anecdote, she adds, “I know for a fact, we used to sit, and her friends would come over, and they'd be like, ‘Arey, woh tumhe mummy nahi bulati hai, maa nahi bulati hai (Does she not  call you mom)?' And my mother-in-law would turn around very proudly and say, ‘Woh jab maa bulayegi na, dil se niklega, dimaag se nahi niklega (When she does, it'll come from the heart, not from the head)...My respect for her deepened.'”

When it comes to handling finances, Twinkle Khanna says that she makes the payments for “all the kids' school, education,” adding, “Because then I can tell them, ‘tum padhe likhe ho (you have an education) only because of me.” Kajol, on the other hand, says that with Ajay Devgn and her, it was all about convenience. “What works online is more me, and offline is more him,” she explains.