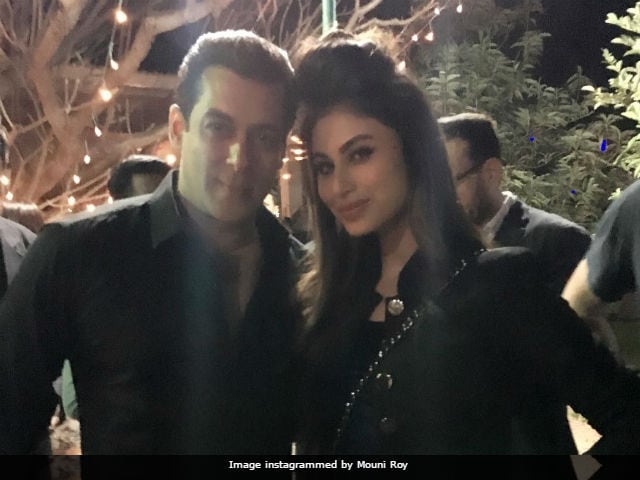 New Delhi: Actor Salman Khan will launch television actress Mouni Roy in one of his upcoming productions, reports DNA. Mouni, who is playing a double role in Ekta Kapoor's Naagin Season 2, is reportedly being considered for one of the Dabangg actor's next production. An industry source told DNA that there is an "untapped potential" in Mouni which Salman has "spotted." The source also said how Salman saw that 'same spark in Sonakshi Sinha (whom he launched in Dabangg'). Salman is particularly impressed by Mouni's 'desi looks'. The source added, "He sees Mouni as being extremely desi, a traditional Indian heroine draped in a sari. He is looking at launching Mouni in one of his forthcoming home productions." Only time will tell if the actress is being launched opposite Salman Khan in Dabangg 3

Salman had earlier complimented Mouni after her special performance in one of the episodes of the reality show Bigg Boss 10. In the episode, where actor Rahul Dev Kaushal was voted out, Mouni performed to Baby Ko Bass Pasand Hai, Salman's song from Sultan. An impressed Salman asked Mouni, why she 'hurts' people with her beautiful eyes. To this, Mouni replied, "Saari baatein aankhon se hi shuru hoti hai ," as she walked towards Salman. This made the Bajrangi Bhaijaan actor blush, who quickly responded with, "Like aankhein nikaal k gotiyan khelna"

Here's a sneak peek to their performance together.

Mouni is in fact a 'school girl' when the actor is around. Here's why.

Always a school girl around him #fangirlforlife

Promoted
Listen to the latest songs, only on JioSaavn.com
Mouni Roy started her career on television with Ekta Kapoor's Kyun Ki Saas Bhi Kabhi Bahu Thi, where she played Krishnatulsi. She has also been a part of other TRP garnering shows like Devon Ke Dev... Mahadev and Pati Patni Aur Woh.

Salman Khan, who will next be seen in the Sino-Indian war drama Tubelight, has earlier launched actresses Daisy Shah and Sana Khan in Jai Ho, Zareen Khan in Veer and Sneha Ullal in Lucky No Time For Love .