Turns Out, Shekhar Kapur Was The "Ghoda" In Masoom Song Lakdi Ki Kaathi

"You thought all the director does is direct," wrote Shekhar Kapur 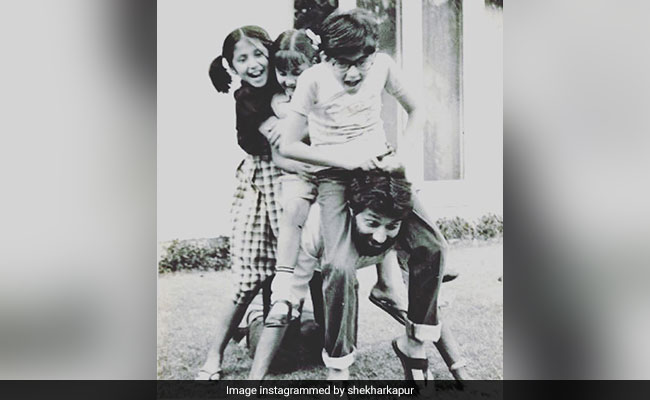 Seems like Shekhar Kapur had a lot of fun while shooting for the song Lakdi Ki Kaathi for his 1983 film Masoom, which also marked his debut as a director in Bollywood. In case you are wondering why, we are here to help. On Tuesday, the 74-year-old director shared a throwback picture from the sets of the film on his Instagram profile. The grey scale photograph also features Urmila Matondkar and Jugal Hansraj, who starred as child artistes in the film. Sharing the picture on Instagram, Shehkhar Kapur wrote: "Remember the song, Lakdi Ki Kaathi from Masoom? You didn't know I was the ghoda in that song, did you? You thought all the director does is direct." In his post, Shehkhar Kapoor thanked Jugal, who originally shared the picture on his Instagram profile. "Thank you Jugal Hansraj for these memories of the shoot for Masoom," he wrote.

Earlier, Jugal Hansraj shared the picture on Instagram and he wrote: "Behind the scenes - fond memories of Masoom days with the one and only Shekhar Kapur." Urmila Matondkar, who played the role of Pinky in the film, wrote: "Aww! Such lovely pics, Jugal." Check out the post here:

Remember the song, Lakdi Ki Kaathi from Masoom ? You didn't know I was the Ghoda in that song, did you ? And you thought all the Director does is direct .. ! Thank you @thejugalhansraj for these memories of the shoot for #masoom Behind the scenes - Fond memories of Masoom days with the one and only @shekharkapur #throwback

The 1983 classic, also starring Naseeruddin Shah and Shabana Azmi, was a Hindi retelling of Erich Segal's bestseller Man, Woman And Child. The film showcased the story of how the news of a man's love child creates havoc in the life of a happy family. Naseeruddin played the father, while Shabana Azmi played his wife in the film. Masoom resonates with today's generation through its iconic songs like Tujhse Naraz Nahin Zindagi and (of course) Lakdi Ki Kaathi.

Besides Masoom, Shehkhar Kapur is best-known for directing films such as Mr India, Bandit Queen and Elizabeth and Elizabeth: The Golden Age. He also had a recurring role in the TV series Khandan in the Eighties.