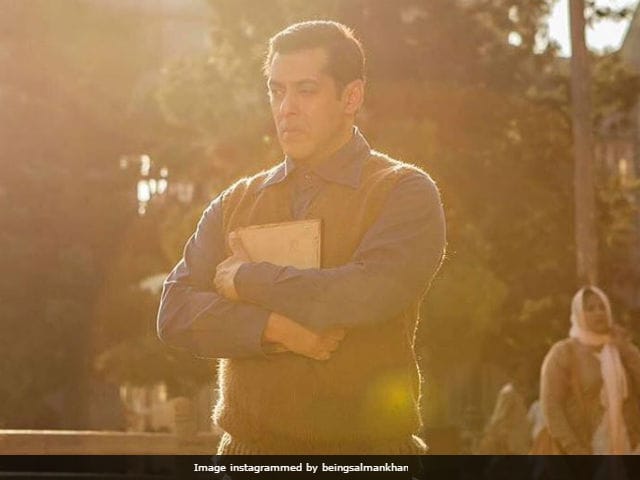 New Delhi: The second poster of Salman Khan's Tubelight was released on early Thursday morning. Dressed in a check shirt and half sweater, the superstar is seen saluting with a rather innocent face. He also has a pair of boots dangling from his shoulders while the background depicts a war scene. The 51-year-old actor tweeted the picture and captioned it as, "Peace, respect, love and light in your life from the Tubelight team (sic.)." Director Kabir Khan also shared the poster, with the caption, "Jaago... #SalmanKaSalaam aaya hai! (sic.)." Moments later, the hashtag #SalmanKaSalaam started trending on Twitter. The film will release on Eid, this year. Here's a look at the poster.

Peace, Respect, Love and Light in your life from the Tubelight team . pic.twitter.com/BXjkn0Xc9m

Tubelight's teaser poster was launched on Wednesday, which had Salman Khan (with his back facing the viewers) walking in a desert area. The actor tweeted the poster and wrote, "Kya tumhe yakeen hai ? Agar tumhe yakeen hai then 'Back his Back' (sic)."

Promoted
Listen to the latest songs, only on JioSaavn.com
Tubelight is set against the Sino-Indian War of 1962. It also marks the debut of Chinese actress-model Zhu Zhu in Bollywood. The film also features Salman Khan's brother Sohail Khan and superstar Shah Rukh Khan in a cameo role.

A 13-second teaser of the film was released earlier this week. The voice-overs of the teaser were that of children from Salman Khan's residence in Mumbai, reported Mumbai Mirror. In a unique promotional strategy, Kabir Khan and Salman Khan decided on using children who are not trained. So they "rounded up kids from the Galaxy Apartments (Salman's residence in Mumbai) and trained them to record the background voice. Kabir Khan told Mumbai Mirror, "Salman and I decided to use a chorus by kids for the teasers but we didn't want to get trained kids to do it. So he suggested we round up a bunch of kids from his building and do it in a fun way."

This will be Salman Khan and Kabir Khan's third collaboration, after Bajrangi Bhaijaan and Ek Tha Tiger. The duo is also working on Tiger Zinda Hai co-starring Katrina Kaif.