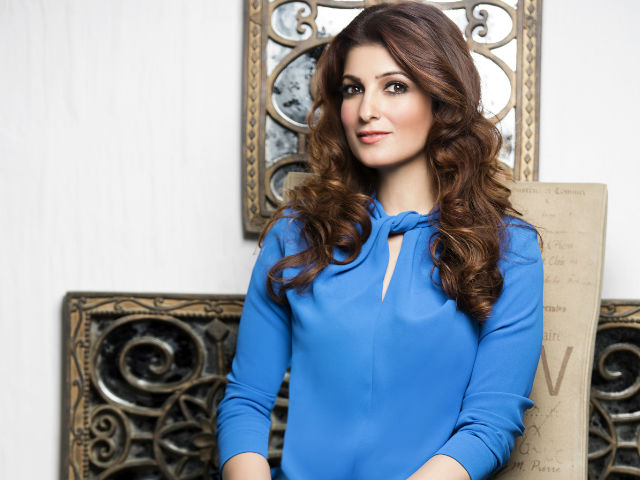 New Delhi: It's not every day that the world of Bollywood finds a break out star. In 2014 it did. And she was 40 when it happened. Twinkle Khanna's greatest work, many would argue, is what she writes - in her columns or in her books. Blisteringly smart, arch and deliciously understated, there's nothing her books or her columns (or indeed her Twitter feed) will not touch on: sanitary napkins, 'anti-nationals', carrier pigeons, Karva Chauth, even Leander Paes' nipples... it's all fair game. As it should be. It was no surprise to anyone that her first book, Mrs Funnybones, made her the highest selling female author of 2015 and, now, her second, The Legend Of Lakshmi Prasad, looks poised to be the same.

Twinkle Khanna spoke exclusively to NDTV's Aneesha Baig and here are 10 most fun quotes from the interview.

On getting away with trolling: "I troll them politely, let's put it that way. In fact, when I am trolling them, I always call them Sir. I like to do it very respectfully."

The case for and against Spanx: "Back in the day, before photoshop existed, there were days when we'd do photo-shoots, we wouldn't drink water on the day of the photo-shoot, because you don't want your stomach to come out. Now, I think you can drink water at least. I don't know if you can eat, but you can drink water! The other thing about it is there are tricks. So, earlier on I would use Spanx, now I can't be bothered. I'd rather breathe than look thin."

Putting her best foot forward: "I have very bad feet. I have torn my ligament, my left leg 40 times. People say that it's because my foot is so damaged because it's always in my mouth."

A scene from her movies that makes her cringe: "I haven't seen any of my movies and now lately, my son has started doing a nasty thing, where he keeps replaying this one scene he's got on You Tube where I'm apparently kissing some man's nipple. And he keeps showing me this again and again and he keeps making these jokes! I think I should blind myself or blind him. I'm not sure which!"

On her qualifications as an actress: "I have no acting skills! You need acting skills to act, not intelligence. They're two different skills."

On husband Akshay Kumar: "He is actually someone who's remarkably comfortable in his skin. He's not been one who cares what people in the industry think about him. He's never been part of any group or clan or needed to do any of those things. He is who he is and he is absolutely fine with it. And I think that's remarkably unique."

On being Mrs FunnyBones: "I have always been the one person standing there, making jokes and cracking up. Whether other people cracked up around me or not was irrelevant. But I would also end up offending a lot of people because I had not honed that completely. With writing, you rewrite. You make sure that you are getting what you have to say across without really offending people - because that's not the point."

On Koffee With Karan and the afore-mentioned foot in mouth: "I have already called him and begged him to delete three lines. So, I hope he does delete those three lines."

More on Karan's coffee: "Akshay drank a lot of it, I think because he could not control himself when I was saying some nonsense."

Promoted
Listen to the latest songs, only on JioSaavn.com
If heaven exists, what she would like God to say to her at the at the Pearly Gates: "I don't want to go to heaven. I want to be immortal, I want to replicate parts of myself and I want to live with an enhanced brain. I want to be able to teleport, by breaking down into atoms and going to another planet. So these are my dreams about the future. It's not going to heaven, no."

Twinkle Khanna's book The Legend of Lakshmi Prasad is out now.