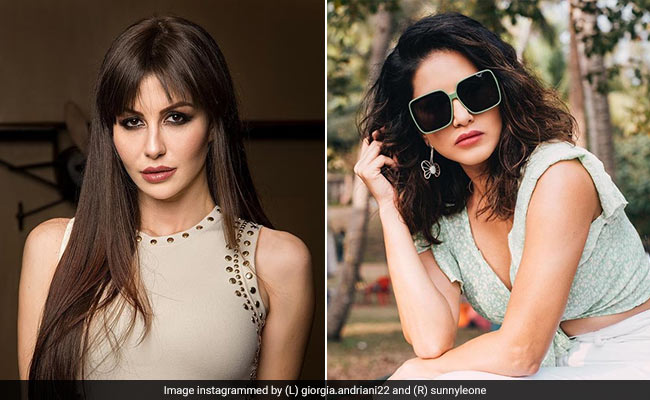 Sunny Leone is currently shooting for the upcoming season of MTV Splitsvilla, the reality TV show. A video posted by Sunny Leone from the sets of the show is trending on the Internet since morning. The clip is all about what it takes to look perfect in a well-fitted dress, "an army" as Sunny says in the post. On Sunday, Sunny had shared the behind-the-scenes video from the MTV Splitsvilla sets on Instagram. In the clip, Sunny can be seen getting ready for the shoot, as her team struggles to zip her dress from behind. We see a few members of her team talking to each other while they are unable to zip the dress. Sunny looks stunning in a yellow bodycon dress in the clip.

"Takes an army to make a gown look perfect!" Sunny wrote in her caption. While Sunny's Instafam went gaga over her video, we couldn't ignore what model-actress Giorgia Andriani wrote in the comment section. Giorgia wrote, "You guys crack me up." In case you don't know, Giorgia is actor Arbaaz Khan's girlfriend.

A few days ago, Sunny posted another behind-the-scenes clip from the sets of MTV Splitsvilla on her Instagram handle. In the video, the actress can be seen getting ready as Rannvijay Singh, who is co-hosting the show, looks at her while sipping a beverage, presumably coffee. In the video, Sunny can be heard asking for coffee. Rannvijay then looks into the camera and says, "She has a problem. She is addicted."

Sunny Leone will now host the MTV Splitsvilla: Season 13 along with Rannvijay Singh. She has been co-hosting the show since 2014. Sunny has films like Veeramadevi, Rangeela, Shero and Koka Kola coming up.