"Something about dancing on sand," read the caption on the post 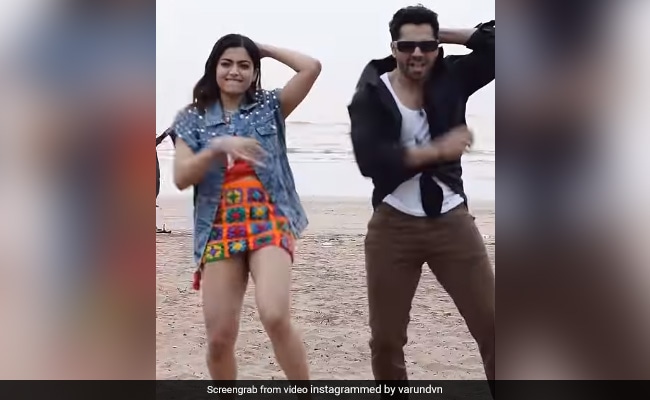 A still from the video. (courtesy: varundvn)

Varun Dhawan and Rashmika Mandanna occupied a spot on the list of trends after they took the viral 'Arabic Kuthu Challenge'. As a part of the challenge, stars are sharing videos of themselves dancing to Thalapathy Vijay and Pooja Hegde's viral song Halamithi Habibo from Beast. The stars shared their rendition of the popular challenge, in which the duo could be seen dancing on the sand. Varun Dhawan captioned the post: "Yo Habibo. Something about dancing on sand." The video got a whole lot of love from the actors' fans.

Rashmika Mandanna started her career as a model for a commercial, from where the makers of Kirik Party selected her for the lead role opposite Rakshit Shetty. After the success of her debut film, Rashmika signed Harsha's Anjani Putra opposite Puneeth Rajkumar and Chamak opposite Ganesh. She also featured in Sarileru Neekevvaru, with Mahesh Babu. She was last seen in the hit Pushpa: The Rise, co-starring Allu Arjun and Fahadh Faasil.

The actress will soon make her Bollywood debut. She will star in Goodbye with Amitabh Bachchan and it will be directed by Vikas Bahl and backed by Ekta Kapoor. Goodbye will be Rashmika's second Bollywood film after Mission Majnu, opposite Sidharth Malhotra.

Varun Dhawan, son of filmmaker David Dhawan, is best known for his roles in films like October, Humpty Sharma Ki Dulhania, ABCD 2, Badlapur and Dilwale, made his Bollywood debut with the 2012 film Student Of The Year. He was last seen in the remake of Coolie No 1 with Sara Ali Khan. The project released in 2020.

Varun Dhawan will next be seen in the film Jug Jugg Jeeyo, co-starring Anil Kapoor, Neetu Kapoor, Kiara Advani and Prajakta Koli. He will also be seen in Bhedia with Kriti Sanon.