Trending: Shruti Haasan Was So Thrilled It Was Her Birthday She Did This '100 Per Cent Crazy' Dance In London

"So this happy dance is from the inside. Not so graceful but fully real and 100 per cent crazy," wrote Shruti Haasan on her video 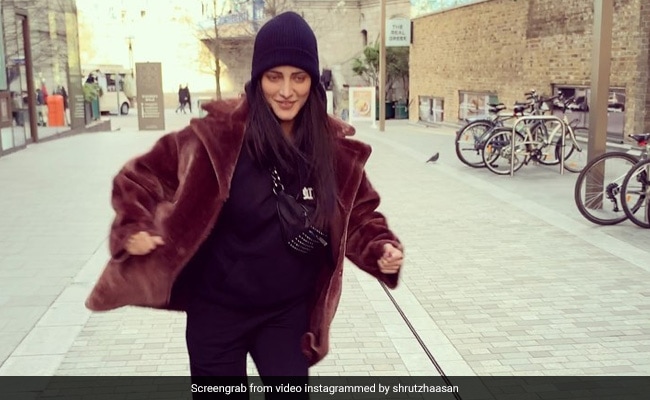 Have you danced like nobody's watching on the street ever? Meet Shruti Haasan as she threw her arms in the air on the streets of London. The Ramaiya Vastavaiya actress celebrated her birthday with friends in London on Tuesday. Shruti Haasan felt elated on her birthday and made a "dweeby" dance video thanking everyone in the post. Her Instagram video came with a long caption as she felt "loved and thankful and happy and blessed." Shruti also took to social media to thank her "incredible online family," who started a website for her on Tuesday. She also mentioned her "dearest friends in London" with whom she could have a "quiet and lovely birthday." "This year has been life changing in many ways and I'm so thankful for the phase of life I'm in! I'm doing everything I ever wanted to in the way that I wanted to do it!" said Shruti Haasan in her post. She wrote about her "not so graceful dance" and said: "So this happy dance is from the inside. Not so graceful but fully real and 100 per cent crazy."

Here's the viral video that we're talking about:

My happy birthday dance today I feel loved and thankful and happy and blessed! I'm such a lucky girl so to celebrate here's a dweeby dance Thankyou to everyone for your wishes and love and especially to my incredible online family who even started my website for me today !! My dearest friends in London with whom I can have a quiet and lovely birthday and my family and friends back home waiting for me. This year has been life changing in many ways and I'm so thankful for the phase of life I'm in !! I'm doing everything I ever wanted to in the way that I wanted to do it! I'm grateful for my work and the different type of work I do and I'm thankful for my support systems and the love they give me. I know now that though it takes time and sometimes the effort seems too much .. the life you want and the life you see in your mind is always yours to take and yours to make ! So this happy dance is from the inside ... not so graceful but fully real and 100 percent crazy

The 34-year-old actress is currently working on a new film Krack. The Telugu language film is being directed by Gopichand Malineni and will release on May 8. Shruti Haasan thanked her Krack team in another post as they released her poster from the film as a birthday gift to the actress. She wrote, "It's been so amazing to work again with Gopichand Malineni and Ravi Teja after so many years!" as she made a comeback to the Telugu film industry after 2017 film Katamarayudu.

Thankyou to my lovely KRACK team for this birthday present !! It's been so amazing to work again with @dongopichand an ravi Teja garu after so many years !! Two of the kindest sweetest people ever so blessed to be a part of such a lovely film Thankyou so much for this

Shruti Haasan has also been working on another film Laabam which is being directed by S P Jananathan. The film a Tamil drama also starring Vijay Sethupathi in the lead. The actress was roped in to "render a melodious romantic track for Laabam." She had posted a picture from the studio of the same. In another post, Shruti thanked the composer D Imman for releasing bits of the song sung by her.

Thankyou so much to my super lovely team of laabam for this special birthday present Thankyou @immancomposer sir for this lovely song ! A big Thankyou to our producers 7cs and vijay Sethupathi and our lovely director janna sir I feel so loved and blessed