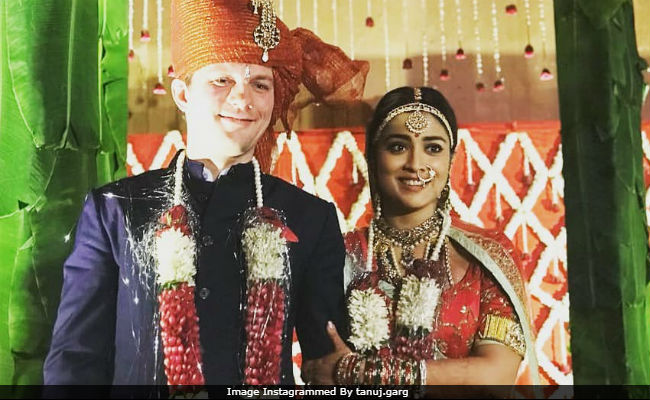 New Delhi: Actress Shriya Saran, who reportedly married her Russian boyfriend Andrei Koscheev in a private ceremony in Mumbai, appears to be hosting the wedding festivities in Udaipur now. Pictures of Shriya and Andrei have been shared by trade analyst Ramesh Bala and film producer Tanuj Garg on social media. In the pictures that are now viral, Shriya looks beautiful in a red lehenga and Andrei complements her in a blue bandhgala. Shriya accentuated her look with kundan jewellery. Going by the pictures, it appears that Shriya and Andrei got married as per Hindu traditions. Shriya and Andrei's wedding in Mumbai had happened last week.

See the pictures from Shriya Saran and Andrei Koscheev's wedding festivities in Udaipur.

A report in mid-day last week stated that Andrei Koscheev is a national-level tennis player and also owns a chain of restaurants in Moscow. "It was a private affair with only family members and close friends present. The only celebrity guests present were Manoj Bajpayee and wife Shabana, who stay in the neighbourhood," a source told mid-day, adding that Shriya had worn a pink outfit for the Mumbai wedding, which happened at her home on March 12.

Promoted
Listen to the latest songs, only on JioSaavn.com
Shriya, who is extremely guarded about her personal life, hasn't yet shared photos from her wedding on social media.

Shriya Saran, 35, is best-known for Hindi films like Awarapan and Ajay Devgn's Drishyam. She made her Bollywood debut in 2003 with Genelia D'Souza and Riteish Deshmukh's Tujhe Meri Kasam. She has appeared in several Tamil and Telugu films. Shriya also starred opposite Rajinikanth in 2007's Sivaji. She was last seen in Telugu film Gayatri.