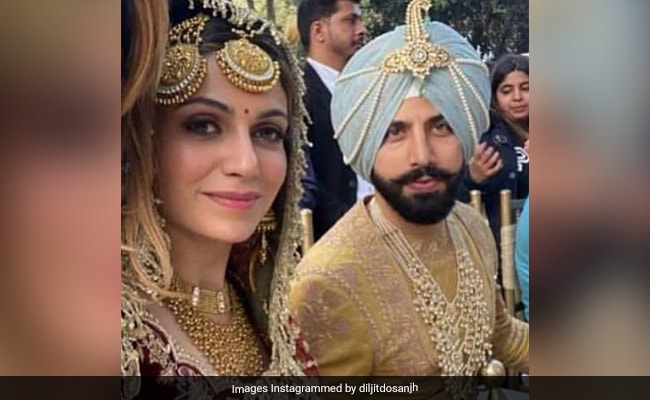 Former Miss India Universe and actress Simran Kaur Mundi got married to singer Gurdas Maan's son Gurickk G Maan on Friday. Simran, who is best-known for her roles in Bollywood film Kuku Mathur Ki Jhand Ho Gayi and Punjabi film Best Of Luck, found a permanent spot on the list of trends on Friday after pictures from her wedding ceremony went viral on social media. The actress married her long-time boyfriend in a traditional Punjabi ceremony in Patiala. Photos from the wedding have been shared by Simran and Gurickk's friends and relatives, including actor Diljit Dosanjh and actress Poppy Jabbal, on their social media profiles. In the viral pictures, Simran Kaur Mundi looks stunning in a red lehenga and a heavily embroidered red dupatta while Gurickk looks dashing in a mustard-colour kurta, which he paired with a blue turban.

Take a look at the photo posted by Diljit Dosanjh, sharing which he congratulated the couple in Punjabi: "Baut baut mubarkan Gurickk veere and Simran. Waheguru always khush rakhe."

Poppy Jabbal shared a photo of the bride and groom, which also featured Gurdas Maan. She wrote: "Congratulations Simran and Gurickk. Have a great and a blessed married life."

Congratulations @simrankaurmundi @gurickkmaan Have a great and a blessed married life

On the work front, Simran was crowned Femina Miss India Universe in the year 2008. She then appeared on reality game show Zor Ka Jhatka: Total Wipeout, which was hosted by Shah Rukh Khan. Simran made her acting debut with the 2011 film Jo Hum Chahein and went on to feature in several other Bollywood and Punjabi movies such as Mundeyan Ton Bachke Rahin, Kis Kisko Pyaar Karoon, U, Me Aur Ghar and Kuku Mathur Ki Jhand Ho Gayi.