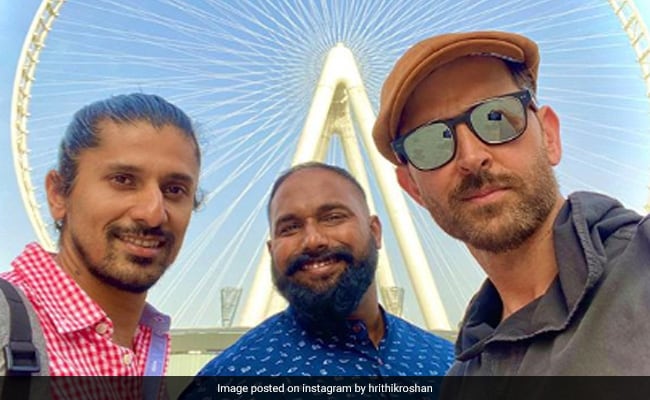 Hrithik Roshan found a spot on the list of trends on Thursday, courtesy his work selfies with his crew in Dubai. The actor added an album to his Dubai diaries on Instagram on Wednesday and the pictures from the album have been trending incessantly on social media since then. Along with Hrithik Roshan, the photos also feature his bodyguard Mayur Shettigar and fitness trainer Swapneel Hazare. Hrithik looks dashing in a black hoodie, which he paired with a brown flat cap and a pair of sunglasses. His bodyguard and trainer, on the other hand, sport casual outfits. In one of the selfies, the trio strike a pose in front of Ain Dubai - the world's tallest ferris wheel.

Mayur Shettigar has also worked as a bodyguard with actors like Aamir Khan and Abhishek Bachchan. This is not the first time Hrithik Roshan has shared a picture of his team. Last month, the actor posted a photo of himself and his "best team" and thanked them for being there for him through all the years. "I can see far cause I stand on the shoulders of giants. Each one a superstar! Thank you for putting the extra in my ordinary. Best team ever," wrote Hrithik.

. I can see far cause I stand on the shoulders of GIANTS. . Each one a superstar! Thank you for putting the extra in my ordinary . Best team ever. . @lakshmilehr @swapneelhazare @iam_sentinel @aalimhakim @sharmasushil805 #vijaypalande .

On the work front, Hrithik Roshan has delivered several hits in his film career such as Krrish, Dhoom 2, Jodha Akbar, Zindagi Na Milegi Dobara, Guzaarish, Agneepath, Kaabil, Bang Bang!, Kites and Super 30. The actor was last seen in the blockbuster hit War, co-starring Tiger Shroff and Vaani Kapoor. Hrithik Roshan has not announced his upcoming project as of now but it has been reported that the actor might play former Indian cricket captain Sourav Ganguly in a biopic directed by Karan Johar. However, neither the makers not the actor has confirmed the biopic yet.