"Mommy is a hairstylist, make-up artist, costumer and a photographer all in 1," wrote Farah Khan 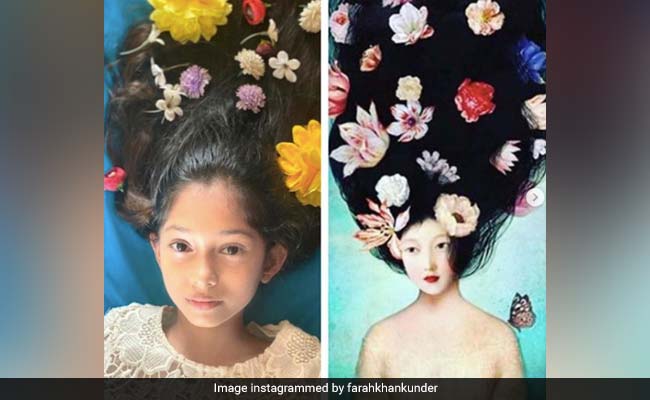 Farah Khan did a great job helping out her daughters Diva and Anya with their school assignments. As a part of their school assignment, Farah's daughters had to recreate classic paintings. In the recreated versions, Anya and Diva could be seen posing in similar fashion to the original creations. The first look was all about flower power, while the second one had a rustic vibe - we loved both, TBH. Farah took charge of the make-up and hairstyling duties and also clicked the stunning pictures. Farah's close friends from the industry also reviewed the pictures. Shweta Bachchan Nanda "loved" the look, while Sussanne Khan summed it up as "fab." Mini Mathur wrote: "Gosh this is fab! I love these." Bhavana Panday called the pictures "amazing."

Sharing the pictures on Instagram, Farah Khan wrote: "Recreate a painting was a school assignment for my daughters. Luckily for them, mommy is a hairstylist, make-up artist, costumer and a photographer all in 1. Quite good I think.. What say? Swipe left." Check out the post:

Recreate a painting was a school assignment for my daughters..luckily for them mommy is a hairstylist, make up artist, costumer & photographer all in 1quite good I think.. what say ul? #anya #diva SWIPE LEFT

It wouldn't be wrong to say that Farah and Shirish Kunder's triplets have inherited their talent. During the lockdown, their son Czar released his rap song titled Need To Survive, which was directed by his sister Diva and edited by Anya.

Meanwhile, Anya managed to raise up to Rs 1 lakh by drawing sketches for donations and thanked those who helped her in the initiative.

1 LAKH RS raised by Anya!! Everyday b4 school n after.. n all weekends , she s diligently sketching for donations! A BIGGG thank you to all who have donated . All monies are being used to feed strays n to send food packages to the slums!

Farah Khan married Shirish Kunder in 2004 and the couple became parents to triplets in 2008, after whom the couple's production house "Three's Company" is named. Farah Khan made her directorial debut with the 2004 film Main Hoon Na. She has also directed films like Om Shanti Om, Tees Maar Khan and Happy New Year. Her last production venture was Netflix's Mrs Serial Killer, starring Jacqueline Fernandez and Manoj Bajpayee. The film was directed by Farah's husband Shirish Kunder.