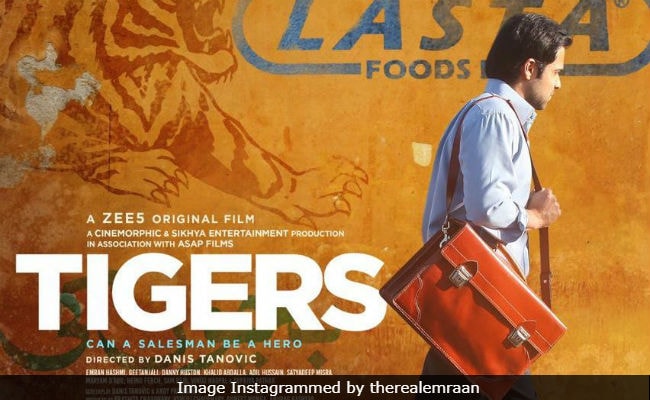 After much ado, Tigers, directed by Academy Award winning director Danis Tanovic is set to release in India. On Tuesday, Emraan Hashmi, who headlines the cast of the film, unveiled the first poster of the film on social media and it went crazy viral. Emraan, who plays the role of a salesman in the film, can be seen dressed in a formal outfit and can be seen carrying a leather bag in the poster. Emraan shared the poster on his social media account and wrote: "From Academy award-winning director Danis Tanovic, one salesman fought against an entire system. His roar for change saved a million lives. This has been long overdue." In his post, Emraan also revealed that the film will premiere on November 21 on Zee 5.

Take a look at the first poster of Tiger here:

From Academy award-winning director @tadivnasinoc , one salesman fought against an entire system. His #RoarForChange saved a million lives. This has been long overdue #Tigers finally premieres 21st November on @zee5

Tigers is Emraan's first international project and it will be directed by Danis Tanovic. The film will be collaboratively be produced by Cinemorphic and Sikhya Entertainment and it will have its world digital premiere on 21 Nov 2018.

Tigers is reportedly based on a true story and it showcases the story of a Pakistani salesman, played by Emraan and depicts his fight against unjust practices in the baby products' industry. Besides Emraan, the film also features National Award winning actress Geetanjali Thapa, Adil Hussain, Guneet Monga and Satyadeep Mishra. The film released in 2014 and it premiered at the 2014 Toronto International Film Festival.

On the work front, Emraan Hashmi is currently filming Soumi Sen's Cheat Indiaalongside Shreya Dhanwanthary. The film is expected to release on January 25 next year.