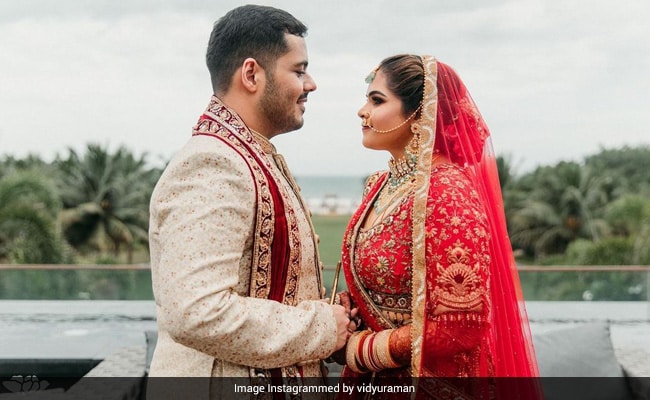 Actress Vidyullekha Raman, who has featured in several south Indian movies, got married to her fiancé Sanjay, who is a fitness expert, on September 9. The duo kept the wedding celebrations low-key and away from the media. Now, on Friday, the actress shared the first photo from her wedding album and it is everything beautiful. She looks gorgeous in a red lehenga from the shelves of Tarun Tahiliani. Sanjay complemented her in a cream sherwani with a red dupatta. Sharing the photo, Vidyullekha Raman marked the date on Instagram calendar: "9.9.21." The actress is currently on a honeymoon with Sanjay in the Maldives but more on that later.

On Thursday, Vidyullekha Raman posted a stunning photo of herself from her honeymoon. She can be seen sporting a floral print dress in the picture that was clicked by her husband. Check it out now:

Vidyullekha Raman is the daughter of Tamil film and television actor Mohan Raman. She got engaged to Sanjay in September last year after dating for over a year. Sharing pictures from their engagement ceremony, the actress wrote: "We got Roka-Ed! Sanjay and I had our roka ceremony (formal announcement) on August 26 in an intimate manner with close family around us. It was our little ray of sunshine and we couldn't be more grateful for the love we received. We wore masks and removed them for the pictures (before anyone asks!) Thank you all so much for showering us with your best wishes! The best is yet to come."