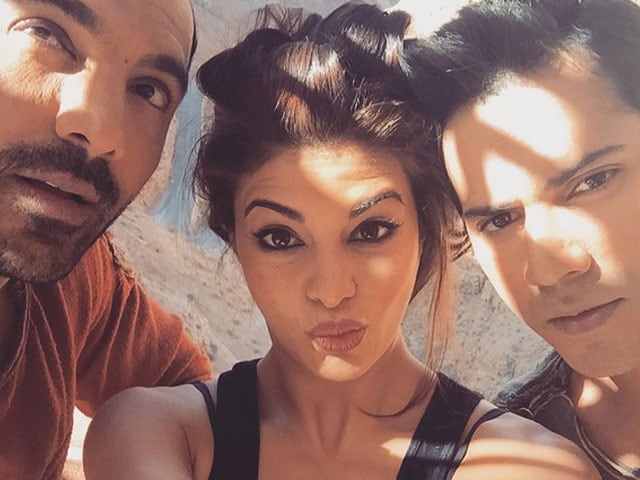 New Delhi: Actors Varun Dhawan, John Abraham and Jacqueline Fernandez have been maintaining a social media record of their shoot for Dhishoom, directed by Varun's brother Rohit. Here are the top 10 Dhishoom moments which were 'Insta' hits with us.

#1: As the very name suggests, muscle-power will play a major role in the movie and it seems the Student Of The Year star has already safe-zoned himself in his alliance with the 'biggest biceps in the industry'. This is the second time that John and Desi Boyz director Rohit have collaborated for a movie, but we bet that it was a first ever 'insanity workout' for Varun.

Much better... Coco and me!! @varundvn take care of my #coco till I get there!!! #dhishoom #morocco #love #monkeyprincess

#4: And then there were 'off-days' when Jacqueline decided to look pretty by the pool side.

#5: This picture of Varun in a pathani suit was assumed to be the first look of Dhishoom. Later, the actor clarified that the first look will be out only "sometime beginning of next year".

#6: Jacqueline also indulged in some 'desert fashion' in Morocco.

Desert fashion with my @biancahartkopf #dhishoom

#8: Namaste. And the cast took off for Morocco.

22 hour journey. Longest of my life with my partner in crime john#Dishoom

#9: When Jacqueline and Varun enjoyed a lavish Moroccan spread with friends. Yum yum!

A photo posted by Mansi Jacqueline fan (@jacquelinefernandezfanclub2) on Jul 21, 2015 at 10:49pm PDT

#10: Varun was much excited when the clap-board marked #Day1 of filming Dhishoom, just a few weeks ago.

Produced by Sajid Nadiadwala, Dhishoom, which is a comeback movie of sorts for actor Akshaye Khanna, is expected to release in 2016.