The strong sequel can attribute much of what makes it work to the comics it's so clearly modeled after. 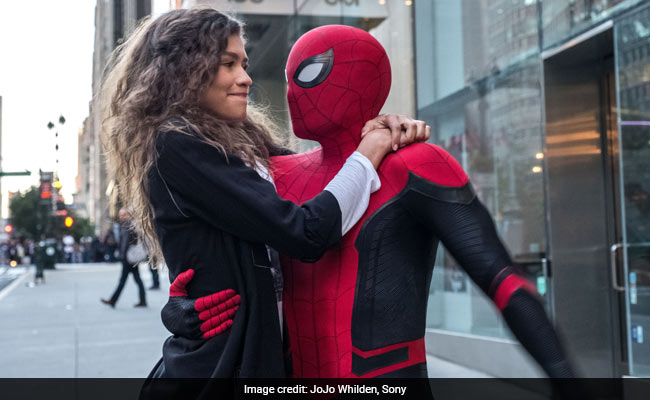 There's no denying it. Tom Holland is the ultimate Spider-Man.

Beyond the laughs, young romance and secret ingredient missing from those Andrew Garfield reboots (a connection to the Avengers movie universe with Marvel Studios swag), Spider-Man: Far From Home is an issue of Marvel Comics' Ultimate Spider-Man come to life.

Ultimate Spider-Man, a new take on Spidey's origin that debuted in 2000, hit newsstands under Marvel's Ultimate Comics imprint (which no longer exists). For more than 100 issues, art duties were handled by fan-favorite Spider-Man artist Mark Bagley, and stories were written by Brian Michael Bendis, who became a comic-book superstar by the time the series was over. Bendis and Bagley (and eventually other artists) had created a saga ripe for picking from Hollywood.

Perhaps the biggest decision in the "Ultimate" comics was to have Spider-Man be a kid. While he debuted as a teen in "Amazing Fantasy No. 15" in 1962, Peter Parker was portrayed as an adult for decades after. In "Ultimate," Peter was once again a high school student grappling with the responsibility of superpowers, trying to find a balance between using them to save the world and being a normal teenager.

It's that same kid factor that sets Holland's Spider-Man movies apart from the previous two franchises featuring Tobey Maguire and Garfield. There's no rushing to a graduation scene here: The high school setting and the kiddie drama that comes with it is just as important to these new movies as a web-shooter.

And just like in the "Ultimate" stories, Nick Fury plays a very large part in our teenage superhero's tale. In the comics, Fury is the voice of guidance to Peter; Samuel L. Jackson fulfills that same role in "Far From Home."

It also helps that the reimagined Fury who made his mark in the pages of "The Ultimates" (the Avengers of the Ultimate Comics universe) was inspired by Jackson, meaning his role may be the most authentic comic-book casting you could hope for.

Watching Fury scold, mold and mentor a Spider-Man who's not the hero the world needs him to be yet in "Far From Home" is like reading an issue of Ultimate - except with Marvel Studios President Kevin Feige personally turning the pages for you and pointing out key moments. That's how much this film hits the jackpot in getting the vibe to transfer from the written and drawn page to the big screen.

That's not to say director Jon Watts didn't have a whole lot of magic to work with: The new sequel features a stellar cast of young comedic actors; the most visually stunning Spider-Man villain ever in the deceptive Mysterio (Jake Gyllenhaal); and one surprise we'll save for later this week to avoid spoiling it for everyone.

The biggest question after watching this new sequel is: Just how faithful will the franchise be to "Ultimate Spider-Man" in the future? The character feels new and fresh again, which is not an easy accomplishment when you remember that the first big-screen adaptation came out in 2002. But there could easily be two more of these movies in the works - and even more adventures if Spider-Man continues to fight alongside the Avengers (should a new team be assembled).

The biggest moment in the history of the Ultimate Spider-Man comic was when Peter died in 2011 to make room for another Bendis co-creation, Miles Morales. (This was admittedly a decision not too difficult to make; Marvel knew it had the "real" Spider-Man in another comic book series.) Since Donald Glover was already introduced as Miles' uncle Aaron (the Prowler) in 2017's Spider-Man: Homecoming," could he be next in line when it's time for Holland to hang up his costume? Or does the success of Miles appearing in his own Oscar-winning animated film, "Spider-Man: Into the Spider-Verse," mean Miles doesn't need a live-action debut and the current MCU Peter Parker can keep breathing?

It's all speculative but within the realm of possibility, given the source material. One thing is for sure, though: The excellent "Far From Home," the rare sequel that's even better than the original, means that good Spider-Man movies aren't a thing of the past anymore. They're a part of the future.