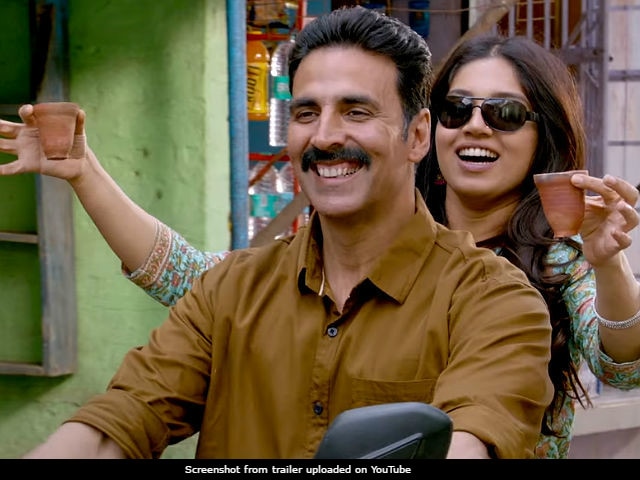 New Delhi: Akshay Kumar's Toilet: Ek Prem Katha needed just a day more than a week to hit the 100 crore mark - which it did on its eight day run at the theatres. That's great Akshay Kumar, considering it records his eighth movie which has toppled over on the other side of the coveted dotted like marking box office century. Toilet: Ek Prem Katha did not really manage to fetch fireworks at the ticket counters on its opening day but bettered its performance over the weekend by a noticeable margin, and then there was no stopping. In three days, Toilet: Ek Prem Katha recorded Rs 51 crore and from an opening day collection of Rs 13.10 crore. Five days later, Akshay's new film currently stands at Rs 100.05 crore with Saturday's contribution of 4 crore, reports trade analyst Taran Adarsh.

With Toilet: Ek Prem Katha's box office triumph, Akshay adds one more 100 crore movie to his resume with two of them having released this very year - courtroom drama Jolly LLB 2 made over Rs 110 crores after releasing in February this year. 2016's Rustom and Airlift, the Housefull series of films, Holiday and 2012's Rowdy Rathore are all part of the same blockbuster genre of films. Akshay's record is only second to Salman Khan, who has 11 such movies to name, stated Mr Adarsh.

Here's how the movie gained traction over the first weekend:

Ahead of Toilet: Ek Prem Katha, Akshay Kumar was rightfully identified by foreign media as 'Bollywood's banker' - "Akshay Kumar is Bollywood's banker, churning out hit after hit, including Rustom, Airlift, and the Jolly LLB franchise," stated a report in Variety magazine.

Meanwhile, Toilet: Ek Prem Katha has already been joined by movies like Bareilly Ki Barfi, VIP 2: Lalkar and Partition: 1947 at the theatres this week.