To Uri And Vicky Kaushal, With Love From Ranveer Singh, Alia Bhatt, Ranbir Kapoor, Varun Dhawan And Others 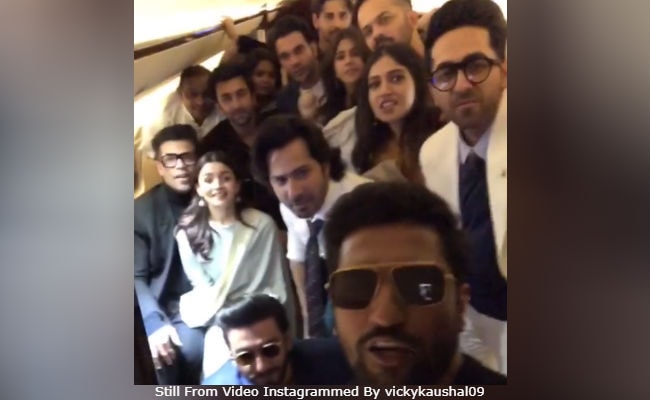 Vicky Kaushal's colleagues like Alia Bhatt, Ranveer Singh, Ranbir Kapoor, Varun Dhawan, Ayushmann Khurrana, Bhumi Pednekar, Sidharth Malhotra, Karan Johar, Rohit Shetty, Ekta Kapoor and many others sent the actor and team Uri their best wishes while travelling together. Uri, based on the 2016 surgical strikes, releases on Friday. These stars, including Vicky Kaushal, were a part of the delegation from Bollywood that met Prime Minister Narendra Modi on Thursday in New Delhi. A video of them saying a dialogue from Uri has been shared by Vicky Kaushal on Instagram. "From us to you. Releasing tomorrow! Uri: The Surgical Strike. 'How's the josh?" Vicky Kaushal captioned the video, which appears to be taken on the flight.

From us to you. Releasing tomorrow! #URITheSurgicalStrike #11thJan2019 "HOW'S THE JOSH!?"

Earlier in the day, a picture from their meeting with PM Modi was shared by Karan Johar. He also shared details about the discussion they had during the meeting.

Powerful and timely conversations can bring about change and this was one of what we hope will become a regular conversation. Meeting the Honorable Prime Minister @narendramodi today was an incredible opportunity. As a community, there is a huge interest to contribute to nation building. There is so much that we want to do. And can do and this dialogue was towards how and what ways we can do that. When the youngest country (in demography) joins hands with the largest movie industry in the world, we hope to be a force to reckon with. Together we would love to inspire and ignite positive changes to a transformative India. The film industry would also like to send a huge thanks for the GST reduction in movie ticket prices that was implemented recently! Thank you so much for your time, Sir!

Meanwhile, in Uri, Vicky Kaushal plays the role of an army officer, who leads a covert military operation, after the Uri Base Camp in Jammu & Kashmir was attacked. He co-stars with Yami Gautam, who has been cast as an intelligence officer.

Watch the trailer of Uri here.

Of the film, Vicky Kaushal earlier told news agency IANS, "In a short span of my career, Uri has been the most physically demanding film for me. We have worked really hard to make that film. It was really nice experience to work in the film."

Uri is directed by Aditya Dhar.