"May you have a rocking year ahead," wrote Raveena Tandon 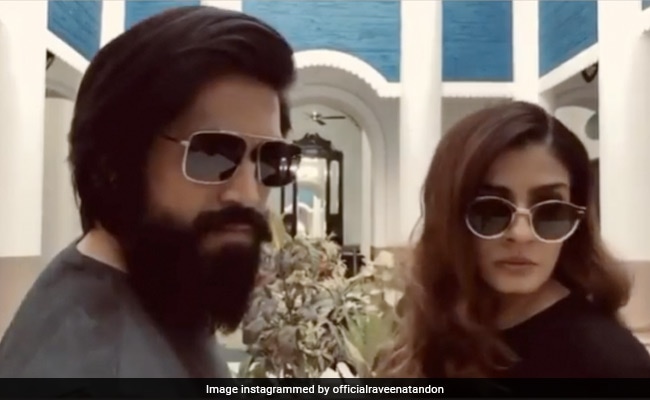 As superstar Yash celebrates his 36th birthday today, his fans, friends and co-stars wished him on social media. One such greeting arrived from Raveena Tandon, who will co-star with Yash in the highly-awaited film KGF: Chapter 2. Ranveena Tandon, on Saturday, shared a boomerang video on her Instagram profile, in which both she and Yash can be seen posing for the camera and their swag is off the charts. In her note, Raveena Tandon wrote: "Happy Birthday dear Yash. With all our best wishes and May you have a Rocking year ahead and many more to come." She added the hashtags #kgfchapter2 and#kgf2 to her post. The caption on her video read: "Happy Birthday Rockstar."

Yash's next project is the sequel to his blockbuster film KGF: Chapter 1. The sequel - KGF: Chapter 2 boasts of an impressive star cast that includes Bollywood veterans Sanjay Dutt and Raveena Tandon. The film will release in April this year and it will clash with Aamir Khan and Kareena Kapoor's Laal Singh Chaddha at the box office.

Yash is also known for his performances in films such as Rocky, Kallara Santhe, Gokula, Thamassu, Modalasala, Kirataka, Lucky, Chandra among others.

In terms of work, Raveena Tandon was last seen in the web-series Aranyak, which is treaming on OTT platform Netflix. The show opened to largely positive reviews.