To Birthday Boy SS Rajamouli, With Love From Team RRR 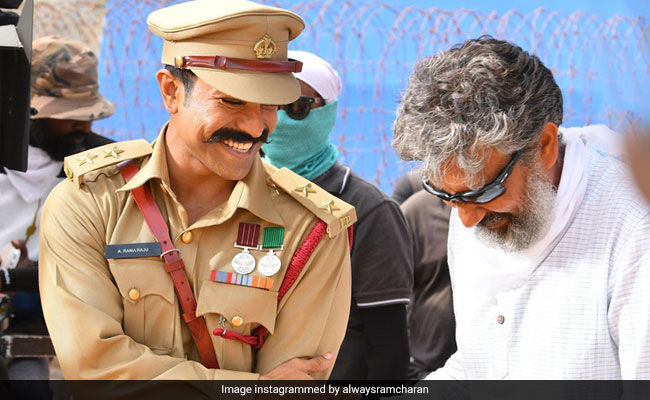 Happy birthday SS Rajamouli. The director who has changed the way the world views Indian cinema with the Baahubali series turns 48 today (October 10). As expected, colleagues and cinema lovers from all around the world are wishing the filmmaker with special posts and messages. Leading from the front is the cast of SS Rajamouli's next film RRR. The period drama features Jr NTR, Ram Charan Tej, Alia Bhatt, and Ajay Devgn in the lead roles. With pictures from the sets of the film to sweet notes praising the director for his skill and vision, the stars made sure that SS Rajamouli had a special day.

Tagging the director on Twitter, Ram Charan wrote, “I look up to in many ways and admire the strength he portrays through his simplicity. Happy Birthday Rajamouli Garu.” The image shows Ram Charan, dressed in police uniform, sharing a laugh with Rajamouli on set.

I look up to in many ways & admire the strength he portrays through his simplicity. Happy Birthday Rajamouli Garu. @ssrajamouli ????❤️???? pic.twitter.com/8tB2EJN7Um

Ram Charan'sRRR co-star, Jr NTR, had a special picture to share as well. Jr NTR also happened to drop the pet name that he uses to address SS Rajamouli. “Happy Birthday dear Jakkana. Love you,” he wrote, sharing an image of the two mid-conversation.

Actor Ajay Devgn, who will be making his Tollywood debut with a pivotal role in RRR, also shared a behind-the-scenes image from the sets of the film. He wrote in a note, “Very many happy returns of the day Rajamouli Garu. It's a memorable experience working and learning from you.”

Very many happy returns of the day Rajamouli Garu????????. Its a memorable experience working & learning from you.@ssrajamouli@RRRMoviepic.twitter.com/iBtsK6HeKu

That's not all. Even actor Mahesh Babu -- who will be teaming up with SS Rajamouli for an upcoming film -- also had the nicest things to say about the filmmaker.

Wishing you a very happy birthday @ssrajamouli sir. May your genius continue to inspire and redefine Indian cinema!

RRR is a fictional take on two legendary freedom fighters - Alluri Seetharamaraju and Komaram Bheem, set in the 1920s. The film is scheduled to release on January 7, 2022. Director Rajamouli announced the release date on social media, and wrote “07.01.2022. It is,” along with a poster of the four actors.

SS Rajamouli is known for his superhit films including Magadheera, Eega and Vikramarkudu.  The Baahubali franchise is the highest-grossing Indian film franchise in history, catapulting SS Rajamouli to international fame.