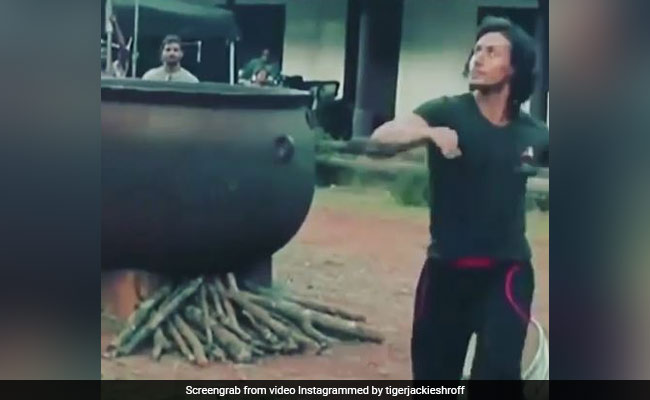 Have you ever tried playing football with a coconut? Well, Tiger Shroff has and he is quite impressed with the attempt. The actor shared a throwback video from the sets of the 2016 film Baaghi. A part of the movie was shot in Kerala and Tiger Shroff did not waste the opportunity to have some fun with this popular local fruit. In the footage, the action star is seen trying to "score a goal" with a coconut. The crew members can be spotted watching Tiger Shroff's off-camera stunt. The caption of the post read, "Scored goals and baskets before.... but coconuts are another story." While there was no goal, Tiger Shroff did come close. The actor agreed, "Close one though...#throwback #baaghi."

This video comes days after Tiger Shroff shared a picture from the sets of Baaghi 2. Tiger Shroff is captured in a dapper look in this still. He captioned the memory as "#3yearsofBaaghi2". The film features his rumoured girlfriend Disha Patani as the female lead.

Last week, Tiger Shroff uploaded a slow-motion video of him punching a bag. It's the caption that added an entirely new meaning to the clip as it read, "Go corona go." Actor Rahul Dev was so enthralled by it that he ended up commenting, "Ufff! It just might."

The War actor posted snaps from the upcoming project Heropanti 2 recently. His new look in a black tailored suit caught the attention of fans but for an alarming reason. The actor was schooled by the Internet users for not wearing a mask unlike the crew members following him. The images are from the first schedule of the Ahmed Khan-directed film.

"Lights, Camera, Action" And You Have Sara Ali Khan's Attention. See Her Post