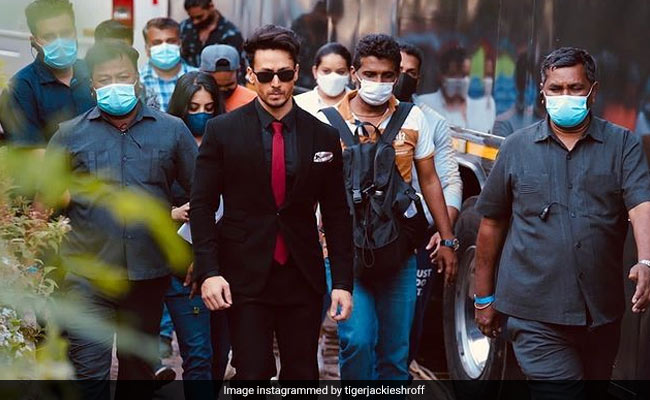 Tiger Shroff's latest picture made its way to Instagram. But fans are not happy. What caught everyone's attention is the fact that the actor isn't wearing a mask unlike the crew members walking behind him. Tiger Shroff is seen in a finely tailored suit. He shared the pictures after the wrap up of the first schedule of his upcoming film Heropanti 2. A user wrote, "Wear a mask." Another stern comment came as, "Put a mask everywhere...coronavirus will not give you an excuse." Some of them simply dropped 'wear a mask' emoji.

The film is a sequel to Tiger Shroff's debut Heropanti. Actress Kriti Sanon also stepped into the world of Bollywood with this film. For the second instalment, makers have roped in Tara Sutaria as the female protagonist. The music is by AR Rahman. The film is being directed by Ahmed Khan, and is expected to release on July 16.

The poster of Heropanti 2 was released in February 2020. Tiger Shroff had shared it on Twitter and wrote, "This one is so special to me. Blessed and grateful to be carrying forward another franchise with my mentor, Sajid sir."

This one is so special to me. Blessed and grateful to be carrying forward another franchise with my mentor sajid sir forward. #Heropanti2#firstbaby#SajidNadiadwala@khan_ahmedasas@WardaNadiadwala@NGEMoviespic.twitter.com/NYi4pLoBpr

Apart from Heropanti 2, Tiger Shroff has Baaghi 4 in his kitty. This film is also being directed by Ahmed Khan. In the previous instalments of Baaghi, Tiger Shroff was paired opposite Disha Patani and Shraddha Kapoor.

Several Bollywood celebrities have contracted COVID-19 in the past few weeks. The Maharashtra government, on Sunday, implemented stricter weekday rules and lockdown on weekends till April 30 to curb the spread of the deadly disease. As on Thursday, the state has recorded 59,907 new cases of coronavirus, taking the overall toll to 31,73,261.