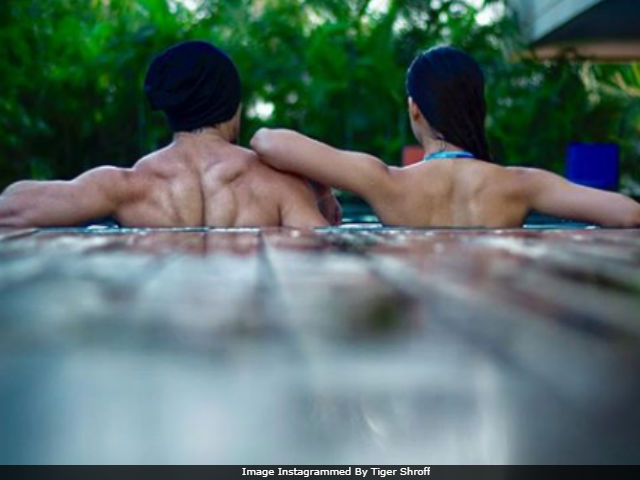 New Delhi: It's a wrap for Tiger Shroff and Disha Patani's forthcoming film Baaghi 2's shooting schedule in Pune. The actors packed the schedule with a poolside picture, which was shared by Tiger Shroff on Instagram. The picture features both Tiger and Disha from the back and has been liked over two lakh times. Tiger's well-toned body is the main highlight of the frame and comments such as, "I love you, Tiger" and "Fabulous. So hot, Tiger Shroff" have been posted. Another section of Instagram users are happy to see rumoured couple Tiger and Disha together in one picture. "You guys are made for each other," read a comment. Tiger Shroff and Disha Patani have earlier co-starred in Befikra, a music video.

Baaghi 2 went on floors in Pune last week. It is a sequel to 2016's Baaghi, in which Tiger Shroff starred opposite Shraddha Kapoor. Of casting Disha in the film, producer Sajid Nadiadwala earlier said, "When we did the look test of both of them together, we were convinced with their chemistry and about Disha being the perfect choice for the role." Meanwhile, Tiger is learning several forms of martial arts for Baaghi 2.

A few days ago, Tiger Shroff's workout picture for Baaghi 2 went crazy viral on social media. Here it is.

Promoted
Listen to the latest songs, only on JioSaavn.com
Baaghi 2, directed by Ahmed Khan, is slated to release next year in April.