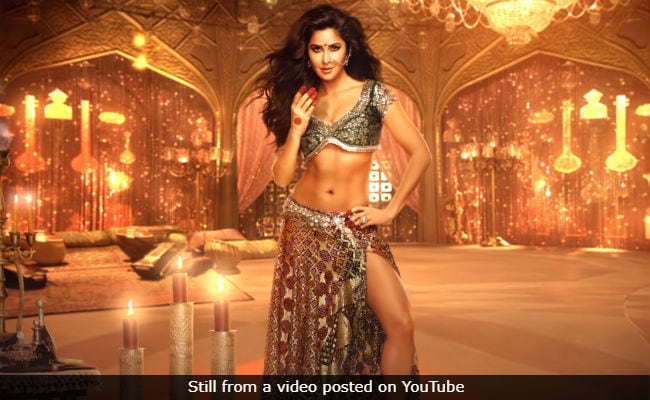 It appears that Aamir Khan has had a crush on Katrina Kaif ever since they starred together in Dhoom: 3 and hasn't mustered up the courage to tell her. Now that she's starring opposite him again in Thugs Of Hindostan - as stunning dancer Suraiyya Jaan - Aamir's asking for help letting Katrina know. If you have no idea what we are talking about, guess you haven't seen Aamir Khan's caption for the first look of Katrina Kaif's character in Thugs Of Hindostan. Katrina made a glittering appearance on social media as Suraiyya Jaan in the motion poster of upcoming film Thugs of Hindostan. But what Aamir Khan wrote almost overshadowed her dazzling appearance: "Suraiyya Jaan... sabse khoobsurat Thug... Dhoom: 3 ke waq se mera dil inpe aaya hua hai.. par kehne ki himmat kabhi nahin hui. Koi agar inhe yeh bata de to bahut meherbaani hogi." Dressed in a shimmering outfit and standing against a glittering gold backdrop, Katrina Kaif as Suraiyya Jaan is a sight to behold.

Take a look at Suraiyya Jaan:

Thugs Of Hindostan is a reunion for Aamir Khan, Katrina Kaif and director Vijay Krishna Acharya, all of whom have worked together in 2013's Dhoom: 3. The film also reunites Aamir Khan with his Dangal co-star Fatima Sana Shaikh (as ace archer Zafira) and his Lagaan co-star Lloyd Owen ( he plays John Clive, commander of the East India Company forces); and for Katrina with her Boom co-star Amitabh Bachchan.

Here are all the other Thugs:

Thugs Of Hindostan, produced by Yash Raj Films, is reportedly based on Philip Meadows Taylor's 1839 novel Confessions of a Thug. Thugs Of Hindostan is touted to be the first mainstream Bollywood film to adapt a Thuggee or Thug story onscreen.

Thugs Of Hindostan will release on November 8.