Thugs Of Hindostan: Amitabh Bachchan And Aamir Khan Share Their Experience Of 'Shooting On The Ships' 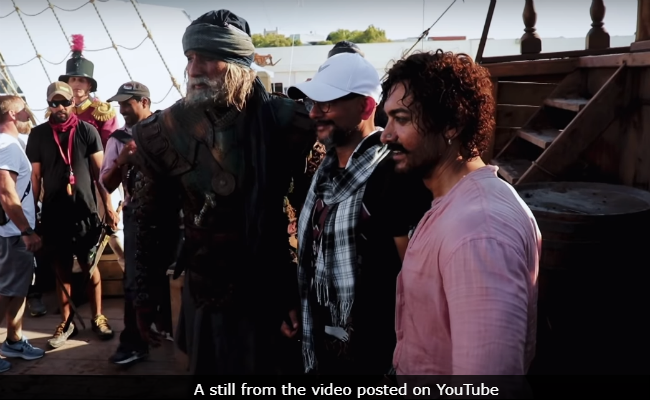 Big B, Vijay Krishna Acharya and Aamir on the sets of Thugs Of Hindostan.(Image courtesy: YouTube )

The makers of Thugs Of Hindostan released the second edition of behind-the-scene video titled 'Chapter 2: Shooting On The Ships,' on social media on Wednesday, in which they documented their experience of shooting on the ships. The three-and-a half-minute video features film's director Vijay Krishna Acharya and film's lead actors Amitabh Bachchan, Aamir Khan and Fatima Sana Shaikh, who can be seen sharing their experience and all the challenges they faced while filming the action sequences on the ships. In the video, Vijay Krishna Acharya described the process of shooting on the ships as extremely "challenging" and revealed that they used water cannons, rain machines and wave makers in order to make the shoot look more authentic. Sharing his experience, Aamir Khan said that the thing that bothered him the most was the water on the deck. "It (water) used to make the deck very slippery and it was very difficult to get a firm grip. When you are shooting for action sequences and if your feet are not firm, you might end up hurting yourself."

In the video, Amitabh Bachchan said that that he has never worked in a film like Thugs Of Hindostan before and added, "I have never worked in an atmosphere like this." Fatima Sana Shaikh was all praises for Mr Bachchan's conviction and stated that despite performing high octane action sequences, the 75-year-old actor was never exhausted and she said "he barely took any breaks."

The video which was released on Wednesday afternoon, has over 5,26,271 views on YouTube. The video was shared on Yash Raj Films official Instagram account and along with the caption: "Building the ships was only the tip of the iceberg. Catch all the action that went on behind the scenes while shooting on the ships during Thugs Of Hindostan."

The first edition of the making of Thugs Of Hindostan was released on Monday, in which the makers of the film revealed that they especially constructed two life-size ships for the film in Malta. Aamir Khan, who was initially apprehensive about shooting on the ships said, "There's a lot of work on the ship in this film and to be honest, I was concerned about that because it is not something we've been doing in India in films."

Thugs Of Hindostan will hit the screens on November 8.