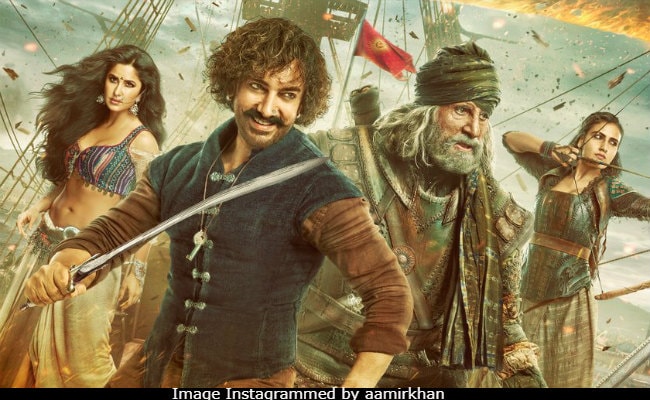 "Thugs Of Hindostan trailer out on September 27!" Katrina Kaif announced with a brand new posted of the movie on her Instagram but it is fan boy Aamir Khan's message that takes the cake. "To see myself on a poster with Mr Bachchan is a dream come true for me. I still can't believe it," tweeted the 53-year-old superstar. This is Aamir's first movie with Amitabh Bachchan. We have indeed been introduced to the thugs separately and now, it's time to witness the fourfold swag that has been packed in one frame. In the poster, Katrina Kaif features as Suraiyya Jaan, a mesmerising dancer, followed by Fatima Sana Shaikh, who plays an ace archer named Zafira. Aamir Khan, who debuted as Firangi only yesterday, looks rather different in the new poster while Amitabh Bachchan clearly steals the show. He plays Khudabaksh - the lord of the sea. "The thugs are here!" shouted out Katrina on Instagram.

Shared on Tuesday afternoon, Katrina's post garnered over 113,888 'likes' in less than an hour and is very much counting. That's crazy viral, isn't it? But Aamir's caption is a must-read.

Directed by Vijay Krishna Acharya, Thugs Of Hindostan is said to be based on Philip Meadows Taylor's 1839 novel Confessions Of A Thug and is believed to bring alive a fictional recreation of an epic battle between the East India Company and the 'Thugs of Hindostan' on screen. Aamir Khan was busy sharing the first posters of the characters and eventually dropped his first look on Monday. Folks on Twitter quickly took out their scrutiny tools and reviewed Firangi as the desi version of Jack Sparrow.

Meanwhile, Aamir has previously confessed about being extremely nervous while shooting with Amitabh Bachchan. Speaking to IANS, he had said: "Finally, he was in front of me, we were rehearsing, and it was really a fan moment for me. I really couldn't speak properly or remember my lines. I was a little spaced out. And I must tell you, it was joyous for me to shoot with him. Every moment with him was a fan world moment for me."