This Thursday, The Mood Is Throwback With Farhan, Zoya Akhtar And Mom Honey Irani 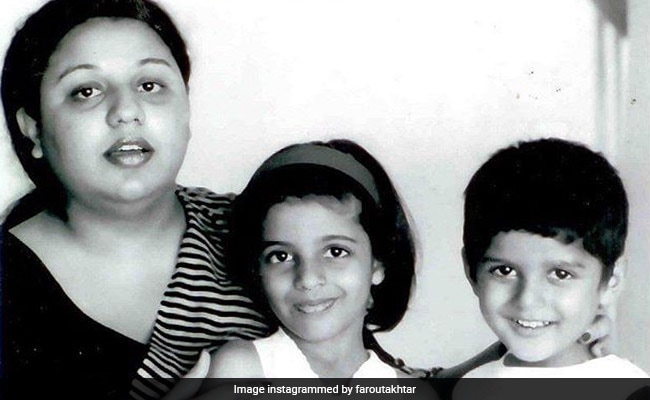 Farhan and Zoya Akhtar in a throwback photo (courtesy Instagram)

Farhan Akhtar dug out a rare throwback photo from his family archives to compose a then-and-now post on Instagram and absolutely nailed it. The actor-singer-filmmaker shared two photos on Instagram with a timeline difference of three-four decades. Both the photos feature Farhan's constants in life - his sister Zoya Akhtar and mom Honey Irani. The first one is a black and white throwback memory, in which little versions of Farhan and Zoya can be seen posing for the cameras along with a much younger Honey Irani. The second photo is of recent times, in which Farhan and Zoya smile ear-to-ear while posing with their mother. Farhan and Zoya were born to writer Honey Irani and lyricist Javed Akhtar, who later got divorced. Farhan captioned the post with the heart emojis and we simply can't think of anything better.

In June this year, Farhan shared another throwback photo from his collection of blasts from the past. Farhan's childhood picture came with an interesting caption: "Seems this picture of us cousins was taken before wide angle lenses were invented." In the photo, pint-sized Farhan and Zoya can be seen posing with their cousins Kabir Akhtar and Nishat Akhtar.

Seems this picture of us cousins was taken before wide angle lenses were invented. @zoieakhtar @kabirakhtar @nishat

Years after from when Farhan's family photo was taken, he began his career in films as an actor, director, producer, writer for 2001 movie Dil Chahta Hai. He has also starred in Zoya Akhtar-directed films such as Luck by Chance, Zindagi Na Milegi Dobara and Dil Dhadakne Do. He was last seen in Shonali Bose's The Sky Is Pink, starring Priyanka Chopra.