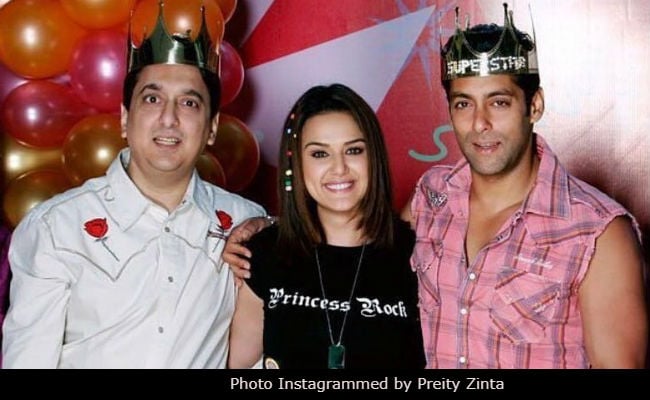 It's not Thursday yet but so what? Actress Preity Zinta shared a throwback photo anyway. Preity dug out a delightful blast from the past featuring herself with her Jaan-E-Mann co-star Salman Khan and producer Sajid Nadiadwala. The photo shared by the 43-year-old actress is apparently from the time when Jaan-E-Mann was about to be released (2006). "Awww! This was such a fun day. I did magic tricks for a bunch of kids after the screening of our movie and both Salman Khan and Sajid Nadiadwala magically appeared after I waved my magic wand," Preity Zinta captioned the photo. She also added hashtags "#throwback", "#funtimes" and "#itsmagic". Directed by Shirish Kunder, Jaan-E-Mann was a romantic drama, which also featured Akshay Kumar and Anupam Kher.

Awww ! This was such a fun day. I did magic tricks for a bunch of kids after the screening of our movie & both @beingsalmankhan & #SajidNadiadwala magically appeared after I waved my magic wand ! #Throwback #FunTimes #ItsMagic #Ting !

Preity Zinta often shares throwback BTS photos from the sets of her films. Previously, the actress had shared a photo of herself with celebrity fitness instructor Deanne Panday and designer Surily Goel from the sets of a film, which she wanted her Instafam to guess. "Can someone guess where this photo was taken? Of course Surily Goel and Deanne Panday cannot say a word."

Can someone guess where this photo was taken ? Of course @surilyg & @deannepanday cannot say a word #throwbackthursday #pz #memories #friendsforever #ting !

Preity Zinta had also shared a throwback photo of herself with the cast Koi... Mil Gaya co-star Hrithik Roshan his ex-wife Sussanne Khan, to whom he was married back then and director of the film Rakesh Roshan. "Back to school! Remember this guys?" Preity captioned the photo. Take a look at the photo here: