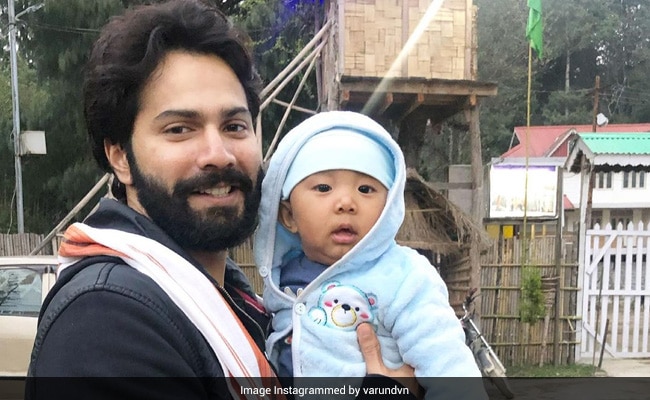 Actor Varun Dhawan, who has been shooting for his upcoming horror-comedy Bhediya in Arunachal Pradesh since last week, met the cutest visitor today. We know about it because he introduced the little munchkin to his fans on his Instagram feed. The visitor is a toddler from Arunachal Pradesh whose smile will surely melt your heart. In the photo, Varun can be seen holding the baby in his arms while posing for the camera. Along with the picture, Varun also shared a video in which he can be seen holding the baby in the air. Varun wears a black jacket in the picture and he completed his look with a scarf.

Varun introduced the baby as Thiagi Kambo in the caption of his post. "Babies of #ArunachalPradesh Thiagi kambo is his name," he wrote in the caption. The actor's fans were all hearts for the post, and they dropped heart and fire emojis in the comments section of the post. "Awww" commented one of the fan.

Varun has been shooting with his co-star Kriti Sanon for Amar Kaushik's Bhediya in Arunachal Pradesh. Earlier in the day, he also posted a picture of Amar Kaushik on his Instagram story. The horror-comedy will mark Varun and Kriti's third film together after Dilwale and Kalank where, Kriti played a cameo. Bhediya is slated to release on April 14, 2022.

Last week, Varun Dhawan and Kriti Sanon shared their experiences of shooting for Bhediya in Arunachal Pradesh. In a statement, Varun said that he wishes to promote Arunachal Pradesh not only for its picturesque topography but for its people.

3 Years Of Dhadak: Janhvi Kapoor And Ishaan Khatter Reveal Why The Film Is Special