In the teaser, Vidya Balan can be seen doing mathematical calculations in the blink of an eye only to arrive at one number - 31.07.2020 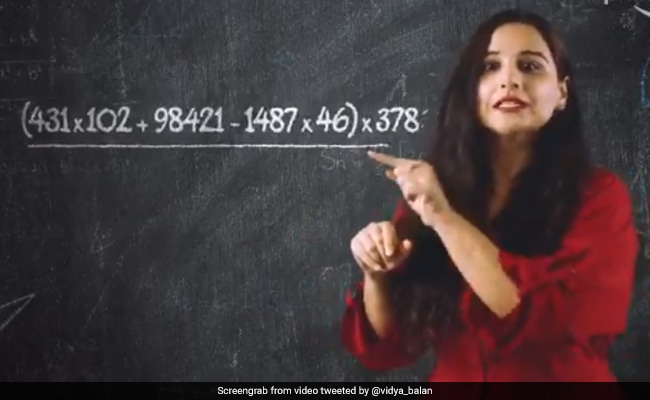 Vidya Balan in a still from the teaser (courtesy vidya_balan)

Eagerly waiting for Vidya Balan's Shakuntala Devi? You won't have to wait too long. The 41-year-old actress, who plays the titular role in the biopic of late mathematician Shakuntala Devi, dropped the big news about the film's release date. Shakuntala Devi, which was earlier roped in for an OTT release on Amazon Prime, will have a world premiere on July 31. Book the date! "Experience the story of an extraordinary mind!" Vidya Balan wrote while sharing the date on Twitter, which was accompanied by a quirky teaser. In the teaser, Vidya Balan can be seen doing mathematical calculations in the blink of an eye only to arrive at one number repeatedly - 31072020, which is basically the release date of the film - 31.07.2020. "Kya hua? Computer ne abhi tak jawab nahi diya?" Vidya says in the video.

Experience the story of an extraordinary mind! #ShakuntalaDeviOnPrime premieres July 31, on @PrimeVideoIN@sanyamalhotra07@TheAmitSadh@jisshusengupta@anumenon1805@sonypicsprodns@vikramix@Abundantia_Ent@ShikhaaSharma03pic.twitter.com/kdi6os0gop

The film was previously scheduled to hit screens on May 8 but was postponed because of the nationwide lockdown. A week after the film's original release date, Vidya Balan made the announcement about the film's digital release and said: "Delighted to announce that you will get to see Shakuntala Devi very soon on Prime Video with all your loved ones. Thrilled that we will be able to entertain you in these unprecedented times."