This Is What Anil Kapoor's Happy Place Looks Like These Days. See Pics

"There's something magical about watching the sunset by the sea," wrote Anil Kapoor 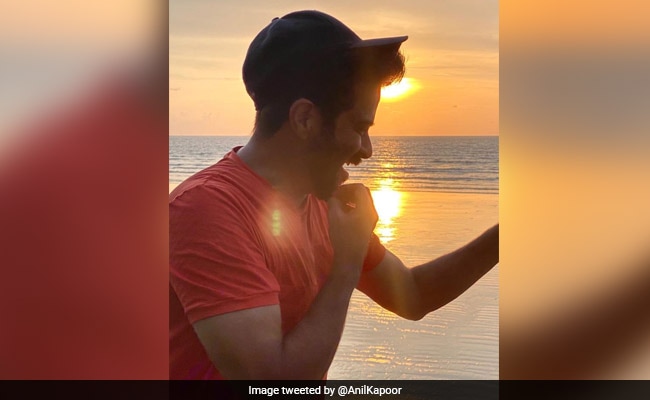 Anil Kapoor shared a glimpse of his happy place in his latest Twitter post on Tuesday and he described it as "magical." The 63-year-old actor, who is currently in Alibaug (going by his recent posts), shared a few happy pictures of himself from the beach and he wrote: "There's something magical about watching the sunset by the sea." He added the hashtags #sunsetdiaries and #goldenhour to his post. Anil Kapoor began the week by sharing a video of himself from Alibaug ( which he visited after 20 long years) and he wrote: "Walking off the Monday blues."

There's something magical about watching the sunset by the sea... #sunsetdiaries#goldenhour
#marcyogimeadpic.twitter.com/t1DiYLv19O

Walking Off Those Monday Blues... pic.twitter.com/1yPgl29MDe

Over the weekend, Anil Kapoor shared a picture perfect post on social media. Anil Kapoor, dressed in a white shirt and blue denims, could be seen happily posing at the beach. "It's been 20 years... #HelloAlibaug," he wrote in his caption. ICYMI, take a look at the post here:

Anil Kapoor frequently features in headlines for his fitness regime. The actor, who has quite a bit of reputation as a fitness enthusiast, often shares pictures from his home work out sessions on Instagram. Sharing a picture last month, Anil Kapoor captioned the post: "When muscles look better than your face." Check out some of the posts here, you can thank us later.

When muscles look better than your face... pic.twitter.com/rasHkYFCIS

In terms of work, Anil Kapoor was last seen Mohit Suri's crime-thriller Malang, co-starring Disha Patani and Aditya Roy Kapur. He will next be seen in Mumbai Saga, alongside John Abraham.