This Birthday Party Throwback Pic Of Allu Arjun, Ram Charan And Chiranjeevi Is All About Nostalgia

"I should be feeding you cake today but instead feeding you with fond memories from our childhood," wrote Ram Charan 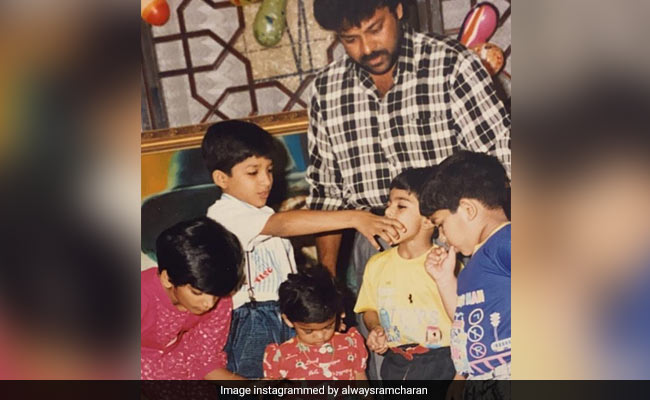 Can you spot Ram Charan and Allu Arjun? (courtesy alwaysramcharan)

Happy birthday, Allu Arjun! The Telugu star turned 37 on Wednesday and was showered with birthday wishes on social media, including one from his cousin Ram Charan, also a south star. Ram Charan flipped through the pages of his family album and zeroed in on a photo of what appears to be Allu Arjun's birthday celebrations from when they were kids. In the blast from the past, Allu Arjun can be seen treating Ram Charan to some birthday cake while Chiranjeevi is managing the chillar party. "I should be feeding you cake today but instead feeding you with fond memories from our childhood," wrote Ram Charan and also gave a shout-out to Allu Arjun's brand new poster of Pushpa: "Have a great birthday bunzu and great poster."

I should be feeding you cake today but instead feeding you with fond memories from our childhood. Have a great birthday bunzu and great poster. @alluarjunonline

Ahead of Ram Charan, his father Chiranjeevi wished nephew Allu Arjun with yet another throwback photo. "Happy Birthday Bunny," Chiranjeevi, who's seen Allu Arjun grow up, captioned the photo.

A post shared by Chiranjeevi Konidela (@chiranjeevikonidela) on Apr 7, 2020 at 8:17pm PDT

Meanwhile on his birthday, Allu Arjun thought of a delightful return gift for his fans. He announced his next film Pushpa along with the first look poster. "First Look and the title of my next movie Pushpa. Directed by dearest Sukumar garu. Music by dearest friend Devi Sri Prasad. Really excited about this one. Hoping all of you like it," Instagrammed the birthday boy.

Welcome to the World of Pushpa Raj

Directed by Sukumar, Alu Arjun co-stars with Rashmika Mandanna in the movie, which is set to release in five languages - Telugu, Tamil, Hindi, Malayalam and Kannada.