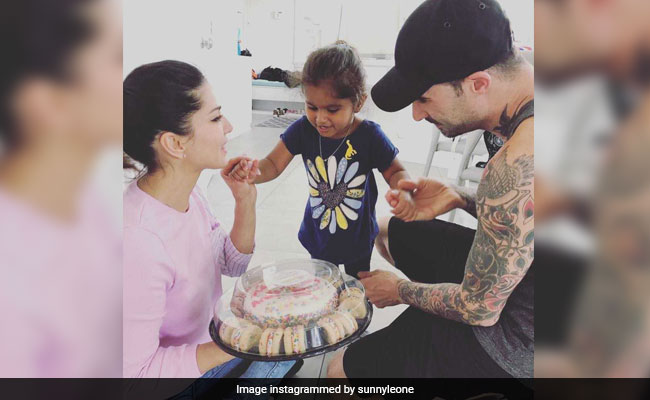 We can't help but love Sunny Leone's latest Instagram post, which features the actress along with her husband Daniel Weber and her daughter Nisha. On Wednesday, Sunny and Daniel Weber celebrated their eighth wedding anniversary and shared pictures from the celebrations on her Instagram profile. Going by the pictures, the anniversary celebrations appear to be a family-only affair. BTW, did we tell you that the couple's anniversary cake was even more special because it was made by the couple's three-year-old daughter Nisha Kaur Weber. Isn't that adorable?

Sunny shared pictures from her anniversary album on Instagram and wrote: "Happy Anniversary Daniel Weber, you are the best part of my life, my best friend and the best father to our children! The greatest part is that our daughter made us our cake."

Happy Anniversary @dirrty99 you are the best part of my life, my best friend and the best father to our children! the greatest part is that our daughter made us our cake.

Nisha Kaur Weber often makes appearances on her parents' Instagram profile. Here are some of our favourite posts.

Happy Holi from the Weber's!!

Happy 3rd Birthday to my baby girl Nisha Kaur !!!! I love you with all my heart and everyday with you is a true blessing. I thank God everyday for allowing him to bring you into our lives !!! You are the meaning of JOY !!!! Xoxoxo @sunnyleone

Sunny Leone and Daniel Weber adopted Nisha in 2017. Other than Nisha, the couple are also parents to two sons named Noah and Asher, who were born via surrogacy.

God's Plan!! June 21st, 2017 was the day @dirrty99 and I found out that we might possible be having 3children within a short amount of time. We planned and tried to have a family and after so many years our family is now complete with Asher Singh Weber, Noah Singh Weber and Nisha Kaur Weber. Our boys were born a few weeks ago but were alive in our hearts and eyes for many years. God planned something so special for us and gave us a large family.We are both the proud parents of three beautiful children. Surprise everyone!

On the work front, Sunny Leone was last seen in the web-series Karenjit Kaur - The Untold Story of Sunny Leone.