The man, identified as Arhhan Singh, is meanwhile trending for an old picture with Shah Rukh Khan 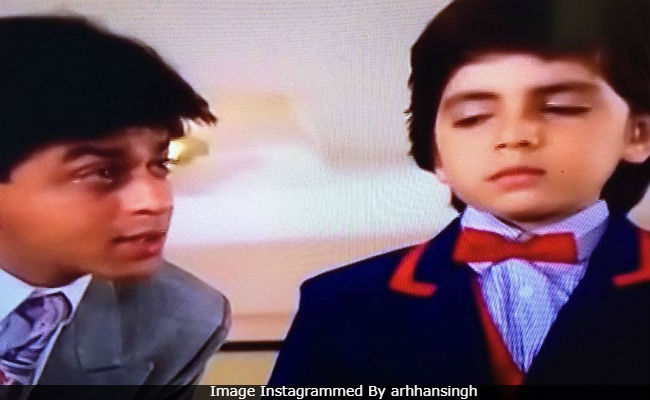 New Delhi: Over the weekend, star couple Anushka Sharma and Virat Kohli trended big time after the cricketer shared a video of the actress scolding a man for throwing garbage on the road. The video received mixed reactions and a day later, the man, identified as Arhhan Singh, posted a lengthy note on his unverified Instagram account and slammed Anushka and Virat. Meanwhile, besides this, Arhhan is trending for another reason. Apparently, he was a child artiste and has worked in a couple of films. Folks have chanced upon a picture of Arhhan with SRK, shared several months ago. It is a still from the film English Babu Desi Mem (1996), also starring Sonali Bendre.

"Throwback to my childhood. What a lovely experience making this film was and working with and learning first hand from the amazing Shah Rukh Khan," he had captioned the post.

#throwback to my #childhood what a lovely experience making this #film was... and working with and learning first hand from the amazing #shahrukhkhan #srk #fondmemories #growingup #movies #bollywood

Also, Arhhan played the role of Vishal, Shekhar Suman and Bhavana Balsavar's son, in the 90s popular TV show Dekh Bhai Dekh. Arhhan had reportedly worked with Madhuri Dixit in Raja and recently starred in Shahid Kapoor's Paathshaala, in which he played one of the students.

His Instagram profile also has pictures of him with Sonu Nigam, Mandira Bedi, Sajid Nadiadwala and other stars.

#Repost @taaniyasingh with @repostapp @rangoonthefilm at the screening last night.. loved every bit of it.. great narrative,excellently executed,with power packed & honest performances... super dialogues ....Was a Treat to watch.. MUST MUST WATCH ON BIG SCREEN. Its a Theatre Film... congrats to my darling friends @wardakhannadiadwala and Sajid Nadiadwala.. wishing the entire team Super Success ...

#aboutlastnight happy birthday to you Ro!!! Stay real and always shine like the star that u are. #friendslikefamily #birthday #party #midweek #fun #blessed

Coming back to Anushka and Virat, the cricketer had posted this.

Saw these people throwing garbage on the road and pulled them up rightfully. Travelling in a luxury car and brains gone for a toss. These people will keep our country clean? Yeah right!!! If you see something wrong happening like this, do the same and spread awareness. @anushkasharma

Promoted
Listen to the latest songs, only on JioSaavn.com
Here's what Arhhan later shared.

Disclaimer: i have no desire to gain any mileage from this post of mine... Horrible! So I happened to carelessly Litter a sq mm of plastic while driving ! A car passing by rolls their window down and there we have our wonderful @anushkasharma ranting and yelling like a crazy roadside person! While I'm apologetic for my carelessness , Mrs Anushka Sharma Kohli a little etiquette and politeness in ur dialogue wouldn't have made u a lesser star !! There are all kinds of manners and hygiene .. verbal etiquette is one of them ! The garbage that mistakenly went out of the window of my "luxury car"... Was way less then the garbage that came out from your mouth... From ur "luxury car's" window... Or the trashy mind @virat.kohli to shoot and post this online... For whatever gains... Now thats some serious trash!!!

Anushka Sharma and Virat Kohli married last December in Tuscany. After the wedding, the couple settled in Mumbai. Anushka recently returned from the US, where she was filming Zero with Shah Rukh Khan.