Meet "The Lady And The Lady Killer": Arjun Kapoor And Bhumi Pednekar, One Snowy Day On Set 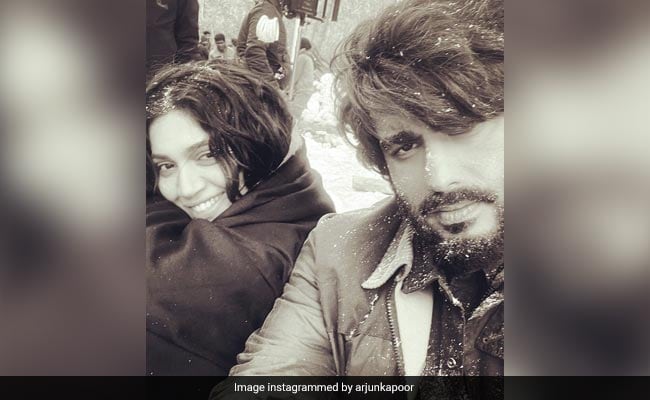 Arjun Kapoor is thoroughly excited about his upcoming film The Lady Killer. This is evident from the numerous posts that the actor has dedicated to the project, giving us a few behind-the-scenes glimpses of the film's shoot. Now, the actor has shared another picture –  a black and white selfie – with his co-star Bhumi Pednekar. In the image, the two are covered in snowflakes. In the caption, Arjun Kapoor said, “Snow Day with Bhumi Pednekar. The Lady and The Lady Killer.” He also added, “It's a vibe babe” and “Throwback Tuesday” as hashtags. And, Bhumi was quick with her reply. She declared, "I am missing the snow here now. Not the same vibe babe but better."

In April this year, Arjun Kapoor shared another picture with Bhumi Pednekar, this time posing with a sheet of snow in the background. In the image, the actors, dressed in winter clothes, laugh out loud without a trace of makeup on their faces. “Saw snow, felt cute, might delete later (not). Lady and The Lady Killer,” Arjun Kapoor wrote in the caption. The star's sister, Anshula Kapoor wrote, “Love this,” with a fire emoji.

This month, Arjun Kapoor also marked ten years of being an actor. Sharing a series of stills, from his debut film Ishaqzaade, in which he is seen with his co-star Parineeti Chopra, the actor said, “10 years of living and breathing Hindi cinema every second of my life. Truly indebted to Adi sir [Aditya Chopra], Yash Raj Films and my director Habib Faisal for giving me Ishaqzaade - a movie that turbo-charged my dream to be a Hindi film hero! A big thank you to Parineeti Chopra for being the most amazing first co-star one could ever get. Last but not the least, also thankful to Shanoo Sharma for finding and helping me audition for Yash Raj Films. Many memories, huge nostalgia and overwhelming love - this film just keeps on giving. Thank you everyone for making an under-confident kid believe in himself.”

Speaking about his journey, Arjun Kapoor added, “As an artist, I'm proud to say that I am a "Work In Progress", with each film being a learning opportunity to get better at my craft. Really fortunate to have got producers and directors who have punted on me time and time again. It has been one hell of a ride. Many ups, many downs. Counting my blessings along the way.”

In addition to The Lady Killer, Arjun Kapoor will be seen in Ek Villain Returns and Kuttey.