"I get why Varun started it, but I don't know why Arjun joined," Katrina had said previously 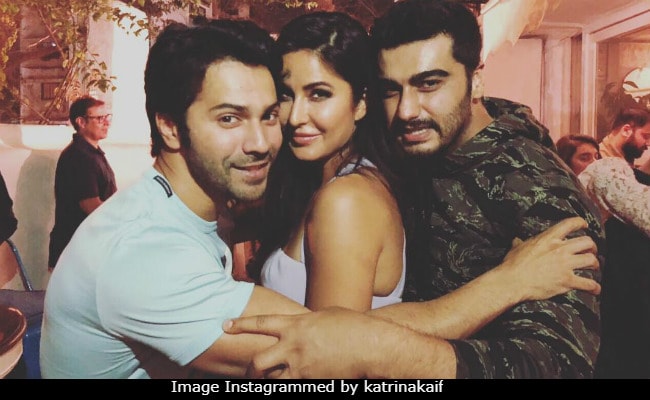 New Delhi: Katrina Kaif is sweet that way - she recently caught up with the originators of one Katrina Kaif hate-club and even took a photo with them. Well, those who conceptualised the "I Hate Katrina Kaif" club are none other than Varun Dhawan and Arjun Kapoor - remember last season of Koffee With Karan? No? We'll just take you through it. In an episode of Karan Johar's show in December 2016, Katrina had revealed Varun started a hate-club and that Arjun Kapoor was also his partner-in-crime. Before that, both Varun and Arjun had taken Katrina's name to refer to the last bit in the Marry-Hook-Up-Kill game on Karan's show.

Well, all of this mock feud started when Salman gave Varun a hard time after he was spotted checking out Katrina at one time when she was walking on bandstand, Mumbai. "I get why Varun started it, but I don't know why Arjun joined," Katrina had told Karan previously. And now, she's posed a photo with Varun and Arjun, saying: "Boys. 15 years with these ones ...... from hate club .... to I think more love and maturity. Now bet I made u feel old." Arjun spotted the photo on Instagram and said it can double up as a poster for a movie titled: "I Hate U but I Love U."

So, is it safe to say the Katrina hate-club is 15 years old now?

Boys 15 years with these ones ...... from hate club .... to I think more love and maturity now bet I made u feel old @varundvn and @arjunkapoor

"I would kill Katrina for reasons," Varun had said while explaining her "grudge" on the actor, Katrina said: "It is because Varun killed me on your show."

Katrina Kaif has not yet worked with Varun Dhawan or Arjun Kapoor but Varun did feature in Judwaa 2, a remake of Salman Khan's Judwaa. The Dabangg Khan also had a cameo in it. Katrina and Salman were last seen together in December release Tiger Zinda Hai, which is now, the second highest grossing Hindi film.
Comments
katrina kaifkatrina kaif hate club