The Force Awakens at The White House. Stormtroopers, R2D2 Invited 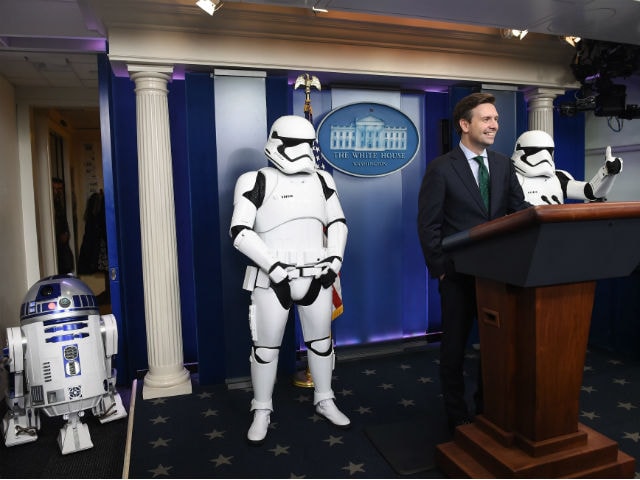 US Press Secretary at a press meet with Star Wars characters in The White House. (Image courtesy: AFP)

New Delhi: The White House, on December 19, had visitors from a galaxy far, far away. Star Wars mania hit The White House in Washington, DC, as the seventh film in the Star War series was screened for Gold Star families and the children of military families. "You've got to admit, this is pretty cool," said US Press Secretary Josh Earnest, who addressed the press with Star Wars characters R2D2 and Stormtroopers, reported the Entertainment Weekly.

Mr Earnest also shared a video of the President Barack Obama addressing the press which he started by saying: "Clearly this is not the most important event that's taking place at the White House today. There is a screening of Star Wars for Gold Star families and children [of fallen soldiers] coming up, so I'll try to be relatively succinct." (Also Read: 10 Star Wars Secrets Only a True Fan Would Know)

We made a lot of progress in 2015, but as @POTUS made clear, the best is yet to come. Watch his end-of-year presser: https://t.co/F7ZFvZA1ik

After making the speech and answering the questions by reports POTUS concluded by saying: "Okay, everybody, I've got to get to Star Wars."

Mr Earnest posted a picture on Twitter, because he 'couldn't resist':

Stormtroopers at the @WhiteHouse, I couldn't resist pic.twitter.com/vzqMikY6uI

Star Wars: The Force Awakens, directed by JJ Abrams, released in US and Canada on December 18, and a day before on December 17 in UK. It will be released in India on December 25. (Also Read: Star Wars Surprise: What Happens When You Type Opening Words Into Google)