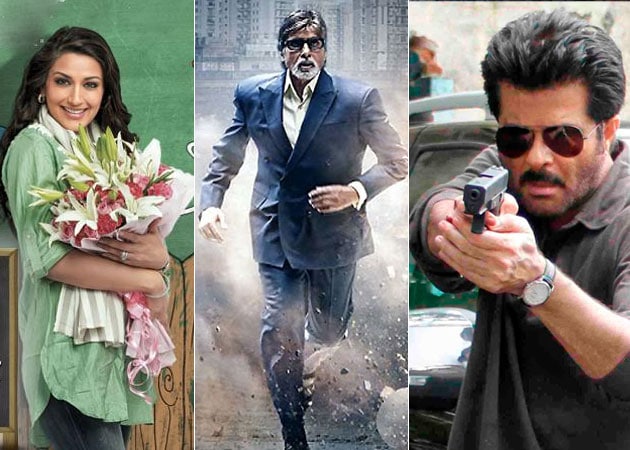 The latest in a string of big-to-small-screen crossovers is actress Sonali Bendre.

New Delhi: The idiom "old is gold" stands true when it comes to reaping TRPs on Television. Just like Homeland's Claire Danes and Two And a Half Men's Charlie Sheen and now Ashton Kutcher, Indian TV shows have also begun casting faces familiar from the big screen.

The latest in a string of big-to-small-screen crossovers is actress Sonali Bendre who will lead the cast of TV show Ajeeb Daastaan Hai Yeh, which begins airing today. Sonali is the star of films such as Hum Saath Saath Hain, Sarfarosh and Kal Ho Naa Ho. She made her last Bollywood appearance in 2013's Once Upon Ay Time in Mumbai Dobara! The show also marks the return of well-known TV star Apurva Agnihotri, who became a household name with TV show Jassi Jaisi Koi Nahin and appeared on controversial reality show Bigg Boss last year.

Game shows like Kaun Banega Crorepati apart, it was actor Anil Kapoor's Indian adaptation of American TV drama 24 that changed the face and quality of TV content. Among the many factors that made 24 a hit show was its enviable cast, which consisted of veteran actors Anupam Kher, Shabana Azmi and Mandira Bedi, among others.

Soon after the successful run of the first season of 24, Bollywood megastar and KBC host Amitabh Bachchan joined Anil Kapoor's league and made his TV drama debut with Anurag Kashyap's Yudh. Like 24, Yudh also boasted a stellar cast comprising Sarika, Kay Kay Menon and Tigmanshu Dhulia, among others.

Yudh, however, met with a lukewarm response due to its slow pace and dense subject matter. But the Big B effect was very much evident as the show relied heavily on the actor's name and face value.

Soon after Yudh, actress Bhagyashree, who rose to fame as the docile yet strong willed Suman in Maine Pyar Kiya, returned to her TV roots with Laut Aao Trisha. Bhagyashree's first success came with TV's Kachchi Dhoop, a 1980s' serial based on the novel Little Women and co-starring Lagaan director Ashutosh Gowariker.

Apart from Bhagyashree, Laut Aao Trisha also marked the return of actress Rajeshwari Sachdev, who is best known for her roles in Shyam Benegal films like Sardari Begum - which earned her a National Award for Best Supporting Actress - and Suraj Ka Satvan Ghoda.

Sonali Bendre says that audiences may find the mix of old and new faces intriguing. "With familiar face people would want to know what they are doing," she told NDTV.

While many new shows are relying on big showbiz names from Bollywood to give them the coveted TRP boost, some TV actors are also considered heavyweights, sprinkling any show they are cast in with a liberal dose of stardust. Actors Sakshi Tanwar and Ram Kapoor's (now concluded) TV drama series Bade Achche Lagte Hain started off and fared well for three years. This was largely due to the presence of and chemistry between its lead actors.

Promoted
Listen to the latest songs, only on JioSaavn.com
Actress Divyanka Tripathi, who became a household name with 2006 TV show Banoo Main Teri Dulhann, returned in a pivotal role after a gap of five years in Ekta Kapoor's Ye Hai Mohabbatein. Actor Karan Patel, who plays the male lead in Ye Hai Mohabbatein, also made a triumphant return after starring in a string of Balaji saas-bahu shows like Kasautii Zindagi Kay, Kkavyanjali and Kasturi. Ye Hai Mohabbatein is in fact one of the most popular drama shows on television. And though the story and picturisation bears striking resemblance to Ekta Kapoor's previous mundane style, the fresh chemistry between the old faces is the show's USP.

Yet another star from the past who has made a comeback on TV is Banoo Main Teri Dulhann actor Sarad Malhotra. Divyanka's off-screen beau has returned to television in right royal style as the adult Maharana Pratap in TV show Bharat Ka Veer Putra - Maharana Pratap Indeed, keeping the Faith in Our Stars and their star value has paid rich dividends for many small screen producers.