The F.R.I.E.N.D.S Reunion Summed Up In This "Bazillionth Selfie" From Jennifer Aniston's Camera Roll

In the snap, Jennifer Aniston is with her co-stars Lisa Kudrow, David Schwimmer, Matthew Perry, Matt LeBlanc and Courteney Cox. 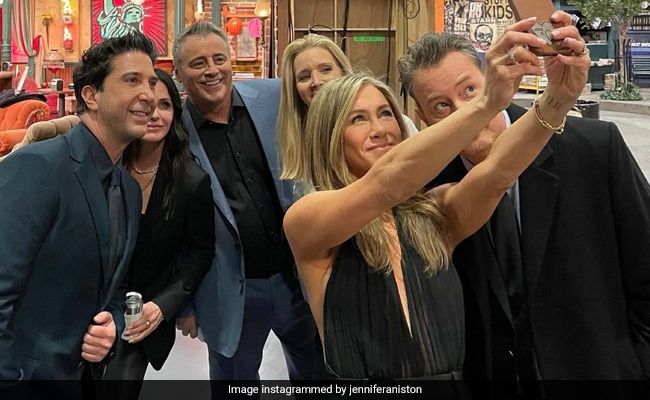 As Rachel Green would say, “So we were not prepared.” Take a look at Jennifer Aniston's latest Instagram entry and try not to cry. Last week, F.R.I.E.N.D.S - The Reunion brought back some of our favourite television stars and a sea of fond memories. Jennifer Aniston, just like us, is still basking in all the love from the nostalgic episode. The first selfie or rather “The bazillionth selfie taken with the five of us” says it all. In the snap, Jennifer Aniston is with her co-stars Lisa Kudrow, David Schwimmer, Matthew Perry, Matt LeBlanc and Courteney Cox. Now, who would have ever imagined a frame like this a few years ago? Again, we bet you are not ready for what follows.

A behind-the-scenes still featuring Justin Bieber, Hailey Beiber and David Schwimmer with an expression we didn't see coming. We also got a glimpse of James Burrows, director of Season 1. Jennifer Aniston wrote in the caption, “Still basking in all the love from F.R.I.E.N.D.S - The Reunion. Thank you each and every one of you. Swipe for the bazillionth selfie taken with the five of us. When two totally different worlds collide - David Schwimmer's face says it all. The legend himself, our director of the first season, Papa James Burrows.”

Now, let's see who sent some love for the iconic post. Maria Sharapova, Oprah Winfrey, Rita Wilson and Naomi Campbell, among others, expressed their emotions with hearts and more.

Just two days back Courteney Cox who played Monica Geller on the show, gave us a major dose of nostalgia. She teamed with her close friend, singer Ed Sheeran to recreate The Routine. For those who don't know, Monica and her brother Ross (played by David Schwimmer) had a popular high school dance routine which they performed on the show at Dick Clark's New Year's 'Rockin' Eve party. That was way too good. Take a bow, you guys.

ICYMI, here is the one that broke the Internet:

F.R.I.E.N.D.S: The Reunion aired on May 27. In addition to the main members of the cast, it featured David Beckham, Cara Delevingne, Cindy Crawford, Lady Gaga, BTS, and other celebs in guest appearances.