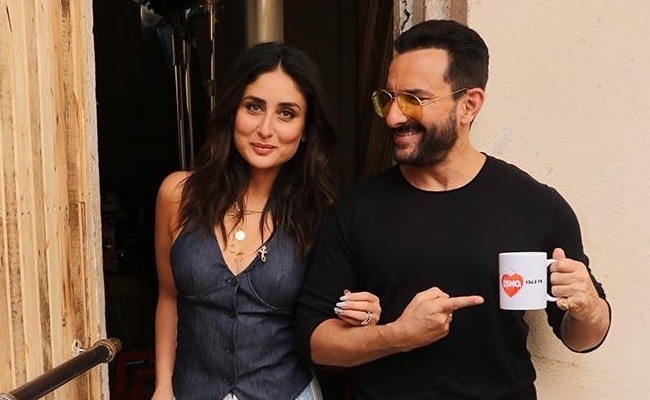 Saif Ali Khan recently made an appearance on Kareena Kapoor's talk show What Women Want and we're so glad he did. On the show, Kareena and Saif talked about their marriage and cherished memories from their dating life. Saif also made certain revelations that left Kareena speechless and also made her blush. Kareena began the show by asking Saif if the concept of "gender defined roles" applies to their marriage, when Saif revealed what Rani Mukerji had told him once. "I remember Rani Mukerji told me once when we had just started dating... you and I. Because I don't think I had ever been out with a working actress before, she said: 'Just behave like you are in a relationship with a man.' I know what she meant. She meant, 'Don't get into the gender of it. Treat it like you got two heroes in the house. And then you'll have no problems'. And I think she's right."

Talking about Rani's advice, Kareena said: "That's a very cool thing to say!" Saif and Kareena got married in 2012. The couple are parents to a son named Taimur.

Saif Ali Khan, who is known for his sense of humour, assigned credit for getting all duties of "travel and administration" done to wife Kareena. When she asked him: "I'm doing all the dirty work. What are you doing?", Saif had this ROFL response: "You know, going on a holiday."

"Whereas, you are completely disorganised and... (you have) no form of time management, whatsoever," said Kareena. "We're asking for some wine soon," Saif responded.

When asked to name a star-couple, who Saif thinks are "acing marriage", the Laal Kaptaan actor said: "Acing marriage... I mean, who knows! You look like you're acing marriage and you might not be. I like Virat (Kohli) and Anushka (Sharma). I think they look really nicely balanced together. They seem happy."

Asked about the "one mistake that should never be made in a marriage", Saif said: "Don't be unfaithful." Meanwhile, Saif had a rather interesting answer when asked about the one thing that married couples must do "to keep the spark alive." He silenced the room with two words: "Role play." LOL.

Kareena, who was at a loss for words, took it sportingly and said: "We've spoken about every possible topic on the show. So, I think its fine."

The serious version of Saif's answer was this: "You should not be too pressurised about keeping the spark alive." He even quoted filmmaker Woody Allen to say: 'I can't keep up the charm for 10 years. I will have a heart attack'."

Watch the full episode of What Women Want featuring Kareena and Saif here:

Twitter Slams Jim Carrey For Sexist Remarks During An Interview