Delhi Winter Brought Out The "Morning Person" In Arjun Kapoor

Arjun Kapoor is shooting in Delhi for a project 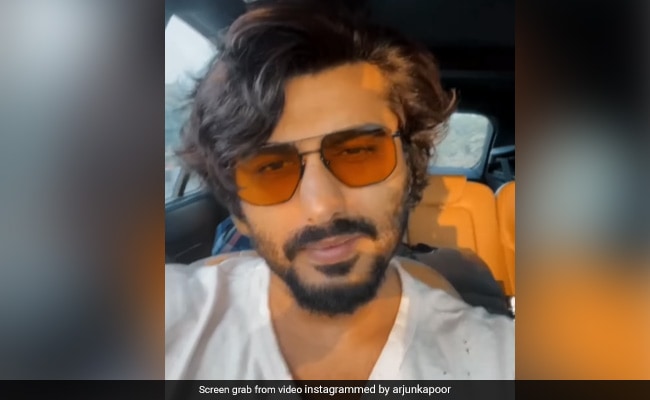 Arjun Kapoor in a still from the video. (courtesy: arjunkapoor)

Arjun Kapoor is not a morning person. We know this because the actor has confessed this in his latest post. But there are exceptions. On some days – like today – the actor is in a happy mood in the morning thanks to Delhi. Yes, the actor is in the capital and the weather and vibes of the city have left him smiling. On Instagram, Arjun Kapoor has shared a video of him travelling in a car, looking fresh and happy. In the caption, he wrote: “On some days, some extremely rare days, even I am a morning person. Thanks to Dilli ki sardi and Dilli ki vibes.” He also added the sun emoji and Hasan Raheem's track Aisay Kaisay in the background.

On Monday, the actor also took a trip down memory lane with celebrity photographer Avinash Gowariker. In a video shared online, Avinash is showing photos of Arjun Kapoor that he clicked before the release of his debut film, Ishaqzaade, in 2010. Sharing the video, Arjun Kapoor said, “Always a pleasure to meet and shoot with the inimitable Avinash Gowariker! This time he made me walk down memory lane with my first and most special photoshoot even before my debut film YRF's #Ishaqzaade!! Nostalgic and grateful (wore a lot of free pieces from Kunal Rawal for this shoot) #workinprogress #MondayThrowback.”

On the work front, Arjun Kapoor, Bhumi Pednekar and Rakul Preet Singh will be seen together in an upcoming film that is being directed by Mudassar Aziz. The team has already completed the shoot for over half the film. The title, however, has not been decided yet. Joking about the lack of a title for the film in a new Instagram post, Arjun Kapoor wrote, “Picture aadhi se zyaada done hai. Director saab, too much fun hai. Humari jodiyan tan tana tan tan hai. Title jald hi batane wale humare producer no 1 hai. [More than half of the film has been shot. Director sir is too much fun. Our team is great. Our title will soon be announced by producer no.1]” along with the hashtag #TitleKyaHaiYaar.

The note was attached to a black and white selfie from the sets of the film featuring Arjun Kapoor with Rakul and Bhumi. Arjun Kapoor also tagged producers Vashu Bhagnani and Jackky Bhagnani of Pooja Entertainment in the caption.

Additionally, Arjun Kapoor will also be seen in The Lady Killer helmed by Ajay Bahl.