Kapil Sharma Woke Up Like This - By The Pool 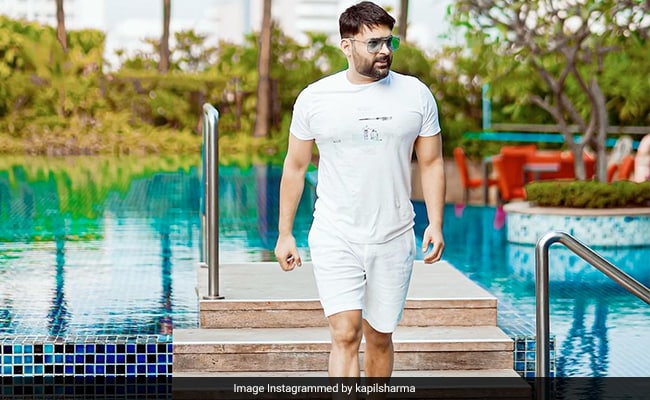 If you are not a huge fan of working out but understand that it is necessary for a healthy lifestyle, head to Kapil Sharma's new Instagram post. In his trademark hilarious style, the actor-comedian has a valuable piece of fitness advice to give fans. Sharing images of him posing by a swimming pool in a white T-shirt and shorts, Kapil Sharma wrote, “If no gym……ing. Then swim…ing. Anyth…………ing. But someth..ing. Good morn..ing.” Acknowledging the lack of enough rhyming words in the caption, he added, “Sorry for my bad rhyming but see my intentions.” The stylish pictures received praise from Kapil's fans, who flooded the comments section with compliments and fire emojis.

On Monday, Kapil Sharma even posed for a series of pictures with Drishyam 2 star Shriya Saran. Sharing the images in which the two are seen in quintessential Bollywood couple poses, Kapil joked, “Sources revealed that there is a beautiful romantic song in #Drishyam.”

Kapil Sharma, who is also a gifted singer, recently shared a bunch of photos of him playing the harmonium. In the caption, he said, “Sometimes music is the only medicine the heart and soul need.”

Kapil Sharma also recently travelled to Busan for the premiere of his film Zwigato, directed by Nandita Das. Along with the photos from Busan International Film Festival featuring the director, co-star Shahana Goswami and wife Ginni Chatrath, Kapil Sharma said: “Gangs of Busan.”

Sharing another video, Kapil Sharma said, “Thank you Busan for all the love. Going back with all the beautiful memories.”

Kapil Sharma has previously worked in films such as Kis Kisko Pyaar Karoon, It's My Life and Firangi.