These Pics Of Tara Sutaria Are Burning Up Instagram 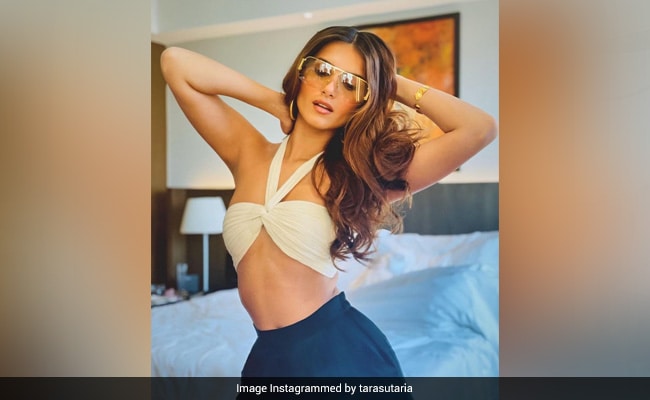 Tara Sutaria is a certified stunner and there are no two ways about it. The actress, who is busy promoting her upcoming film Tadap, has the Internet glued to her Instagram timeline as she shared some smouldering pictures of herself on Tuesday.  Tara Sutaria shared a bunch of photos in which she is seen in a white halter neck top and black pants. Also, you cannot miss the oversized glasses that frame her face perfectly. Dropping the stunning photos, the star wrote in the caption, “Yesterday,” with the hashtag “Tadap Day 6”. As expected, fans of the actress lined up in the comments section to tell her just how amazing she looks.

If these images of Tara Sutaria give you major retro vibes, then the actress has succeeded. We say this because Tara Sutaria confessed in her Instagram Stories that her look is inspired by the yesteryear diva Zeenat Aman. Sharing a Boomerang video, Tara Sutaria said, “Channeling my inner Zeenat Aman.”

A few days ago, the actress shared another look from the promotions of the film. This time, however, it was the pose that caught the viewers' attention. The diva is seen laying on a chair with her hands and legs sticking out from either arm of the chair. While Tara Sutaria looks elegant as ever, the choice of pose did not go unnoticed with her Ek Villain Returns co-star Arjun Kapoor. Reacting to the comment, Arjun Kapoor said cheekily, “Rather odd place to pass out you have chosen…” To this, Tara Sutaria replied, “You know me… always ready to nap.”

We also saw some banter between Arjun Kapoor and Tara Sutaria when the actress shared a photo of herself with the caption, “Waiting for my birthday like…” To this, Arjun Kapoor said, “Forget birthday... This is you just waiting to start shooting with me again…”

In Tadap, Tara Sutaria will be sharing screen space with debutant Ahan Shetty. Ahan Shetty is the son of actor Suniel Shetty. The film is directed by Milan Luthria and is the official remake of the Telugu film RX 100 that was released in 2018. RX 100, which starred Kartikeya Gummakonda and Payal Rajput, was a success at the box office. Tadap is scheduled to hit the screens on December 3.