Tamannaah Bhatia On Working With Sajid Khan: 'He Never Treated Me In A Bad Way'

Tamannaah Bhatia has starred in Sajid Khan-directed films such as 2013's Himmatwala and 2014's Humshakals. 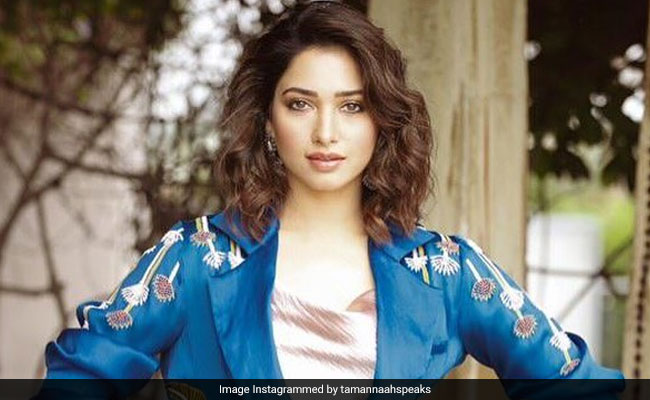 Actress Tamannaah Bhatia recently shared her experience of working with filmmaker Sajid Khan, who has been implicated in several #MeToo accounts, and said: "He never treated me in any bad way and I was completely comfortable working with him," reported Deccan Chronicle. Citing Vidya Balan, who said on a talk show that she will never work with Sajid Khan again, the Baahubali actress added: "Everyone has a different experience and everybody is entitled to their own opinion and experience. If Vidya has had a bad experience, it's normal for her to react like that," reported Deccan Chronicle. In Bollywood, Tamannaah has starred in Sajid Khan-directed films such as 2013's Himmatwala and 2014's Humshakals.

Tamannaah said for her, deciding on a project always depends on the script: "For me, it has always been about the script and what's the kind of film that I am working on. When I worked with Sajid, unfortunately, none of our films did well."

Last year, Sajid Khan was accused of sexual harassment in three separate #MeToo accounts by actresses Saloni Chopra and Rachel White and journalist Karishma Upadhyay. The filmmaker resigned as the director of Housefull 3 with a statement that read: "I must take the moral responsibility of stepping down from my directorial post, till the time I can allay the allegations and prove the truth." In December, Indian Film & Television Directors' Association (IFTDA) suspended the filmmaker over sexual harassment charges. Farhad Samji has replaced Sajid Khan as the director of Housefull 4 while Nana Patekar, who was also named as an alleged sexual predator, has also been replaced by Rana Daggubati.

After Sajid Khan was outed as an alleged sexual harasser, actresses like Bipasha Basu and Aahana Kumra opened up about their separate encounters with Mr Khan. Speaking to Bombay Times, the Lipstick Under My Burkha actress claimed that Sajid Khan asked her "bizarre questions" and that he allegedly "did the same thing that Saloni (Chopra) has written about him." Bipasha Basu, who also starred in 2014 film Humshakals, had tweeted to say Sajid Khan allegedly "cracked lewd jokes openly and was pretty rude to all girls."

I am glad that women are speaking up about the atrocities of these men with power and clout... but nothing of that sort happened with me...it was just his general attitude toward women that would disturb me on set- he cracked lewd jokes openly and was pretty rude to all girls .

Tamannaah Bhatia is best known for her starring role in the Baahubali series of films. Some of the most popular films from the 29-year-old actress' resume includes 100% Love, Happy Days, Ayan, Oopiri, Konchem Ishtam Konchem Kashtam and Endukante... Premanta.