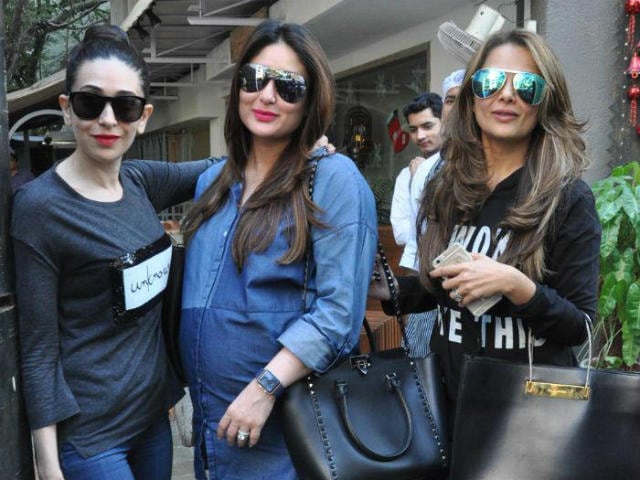 New Delhi: The birth of Kareena Kapoor and Saif Ali Khan's first child, a son they've named Taimur, has been welcomed on social media by Instagram posts and tweets from the celeb couple's family and friends. Taimur Ali Khan was born in Mumbai's Breach Candy Hospital this morning and his parents released a statement welcoming him shortly afterwards. On Twitter, the baby announcement was made by filmmaker Karan Johar, who Kareena in 2001's Kabhi Khushi Kabhie Gham... and produced Saif's film Kal Ho Naa Ho in 2003. "I'm so, so happy," tweeted Karan, the first to congratulate the new parents online. His tweet was followed by posts from Kareena's sister Karisma Kapoor, best friend Amrita Arora and celebrities like actors Sonam Kapoor and Tusshar Kapoor, and singer Sophie Choudry. Meanwhile, Saif's sister, actress Soha Ali Khan is "delighted."

This message was posted by Karan Johar:

Kareena's close friend Amrita Arora welcomed her to the 'Mommy club' with an adorable picture of Kareena and Saif:

Soha shared updates about the mother and the baby:

Delighted to welcome Taimur Ali Khan Pataudi into the world. Both mother and son are healthy and doing well. Father is doing extremely well!

Sonam, who co-stars with Kareena in Veer Di Wedding wrote:

Congratulations my darling bebo and Saif! #taimuralikhanpataudi is going to be the apple of... https://t.co/wbe9ixPW8X

Tusshar and Sophie sent 'heartiest congratulations' on Twitter. Tusshar made his Bollywood debut opposite Kareena Kapoor with 2001's Mujhe Kuch Kehna Hai. Tusshar Kapoor is a single father to a son, who was born through IVF and surrogacy.

My heartiest congratulations to a favorite costar and my 1st heroine!Following up to a stellar career, now, may this day be the start to an

even more glorious life with God's blessing in hand! Cheers to Saif and her both and peace and everlasting joy to the little prince!

Congrats beautiful Bebo & Saif on the birth of your baby boy!!! Such amazing news! God... https://t.co/bq8xnGpzDP

This morning, Kareena and Saif announced baby Taimur's arrival with this statement: "We are very pleased to share with you all the wonderful news about the birth of our son: Taimur Ali Khan Pataudi, on the 20th of December 2016. We would like to thank the media for the understanding and support they have given us over the last 9 months, and of course especially our fans and well-wishers for their continued affection. Merry Christmas and a happy new year to you all."

Promoted
Listen to the latest songs, only on JioSaavn.com
Kareena Kapoor, 36, and Saif Ali Khan, 46, fell in love on the sets of 2008 film Tashan. They dated for four years before getting married in 2012.

Kareena Kapoor will next be seen in Veere Di Wedding, with Sonam and Swara Bhaskar. Kareena made headlines when she was cast in the film - actresses have earlier been dropped from movies after announcing their pregnancies, notably Aishwarya Rai Bachchan who was replaced by Kareena in Madhur Bhandarkar's Heroine. Kareena was last seen in Udta Punjab, co-starring Shahid Kapoor, Alia Bhatt and Diljit Dosanjh. Saif Ali Khan has director Vishal Bhardwaj's Rangoon releasing next year.